Is There a Consensus about Climate Change?

So how can we, non-climate scientists, know if climate change is happening, and if it is caused by human activities?

The natural starting point is to look for signs of scientific consensus. What are they?

This graph gives the quick answer. It is a summary of the largest reviews of scientific publications, scientists views, and the statements of scientific organisations (here and here).

But let’s not stop there. What does that entail? There are a number of reviews and surveys. Depending on how they are set up, not all can say exactly the same thing. Furthermore, does consensus mean that scientists are voting about science?

To get a more in depth idea about the scientific consensus, let’s first take a look at:

Wikipedia tells us the following on scientific opinion on climate change:

The scientific opinion on climate change is that the Earth’s climate system is unequivocally warming, and it is extremely likely (at least 95% probability) that humans are causing most of it through activities that increase concentrations of greenhouse gases in the atmosphere, such as deforestation and burning fossil fuels.

They go on to provide synthesis reports, statements from academies of science, science councils, unions, societies, federations, and so on. They give this summary:

No scientific body of national or international standing maintains a formal opinion dissenting from any of these main points. The last national or international scientific body to drop dissent was the American Association of Petroleum Geologists,[10] which in 2007[11] updated its statement to its current non-committal position.[12] Some other organizations, primarily those focusing on geology, also hold non-committal positions.

Nasa provides another summary of the scientific consensus, with the same message:

The following page lists the nearly 200 worldwide scientific organizations that hold the position that climate change has been caused by human action.

On top of that, they also say:

This is a somewhat different line of argument. It seems to be quantifying the opinions of individual scientists, not the conclusions reached by the institutions. What is this quantification of agreement among scientists based upon? Does each scientist get a vote? What do they have to be a scientist in? Do they all understand the problem in depth? Certainly there are some factors to be careful of before diminishing scientific agreement on real world phenomena into simple voting.

Asking scientists to ‘vote’ is indeed one of the ways to conduct these surveys. It does tell us something about the scientific agreement, but that’s not all consensus is about – there are more important ways of quantifying the degree of agreement.

For our second way of getting an idea about what is going on in climate science, let’s take a look at:

Nasa and Wikipedia mention of several surveys. From what I can differentiate, these include at least three different types.

A) Surveys of scientific publications

This means categorising hundreds or thousands of scientific papers on climate change according to positions expressed in their conclusions – if they reject or support human induced climate change. This method differs in an important way from voting. Rather it  describes the scientific landscape on climate. To get published in a scientific journal, a paper must have original results to present and it must pass the scrutiny of peer-review. You don’t simply get ‘a vote’ because you are a scientist, you have to have something robust to say, too.

There are three surveys of this type what I can find:

Nasa mentions Powell 2013 and Oreskes 2004 in their conclusion, as well as a third survey, which is of a different type:

There is only one study of this type that I know of, Anderegg et al 2010. They say the following about Anthropogenic Climate Change (ACC):

Here, we use an extensive dataset of 1,372 climate researchers and their publication and citation data to show that (i) 97–98% of the climate researchers most actively publishing in the field surveyed here support the tenets of ACC outlined by the Intergovernmental Panel on Climate Change, and (ii) the relative climate expertise and scientific prominence of the researchers unconvinced of ACC are substantially below that of the convinced researchers.

Then there is the third type, we could call this the democratic one:

These surveys use ‘mere voting’ so to say as their methodology, and they tend to have more variability. A score of early polls conducted in the nineties have very variable rates, some majorities rejecting, some accepting AGW, depending on the wording of the questions and the subgroup of scientists asked. Among those conducted since the year 2000, I count 6 surveys of purely this type from the Wikipedia surveys page.

Most of these 6 surveys receive responses from only a few hundred scientists at a time (of the field or society of choice). The only one to go above a thousand is the survey by Doran and Kendall Zimmerman, 2009, which reached 3000 or so out of the 10 000 earth scientists polled.

Wording and rating systems differed greatly, but the overall trend is in support of predominantly human induced warming, as follows:

Two surveys stuck out of this trend:

Lefsrud and Meyer, 2012, a survey of engineers and geoscientists reported that 51% were skeptical of AGW and only 36 % ‘comply with Kyoto’, and an earlier survey by Bray and von Storch from 2003, which uses a more complex rating, seemed split roughly 50-50.

One thing that is worth considering, is that voting is indeed a crude indicator of what the body of science is agreeing on (when looking at the papers being published). Voting or scientist’s views are also not equivalent – does somebody who has published one paper have as good a grasp of the field as one who has published 15? Or someone whose topic touches on the topic of climate in a marginal way?

This is well illustrated by this graph which sorts the views according to their relevance, taking in consider the relation of the scientists to the active field of climate science. It also shows the difficulty that climate science has in communicating to the general public. 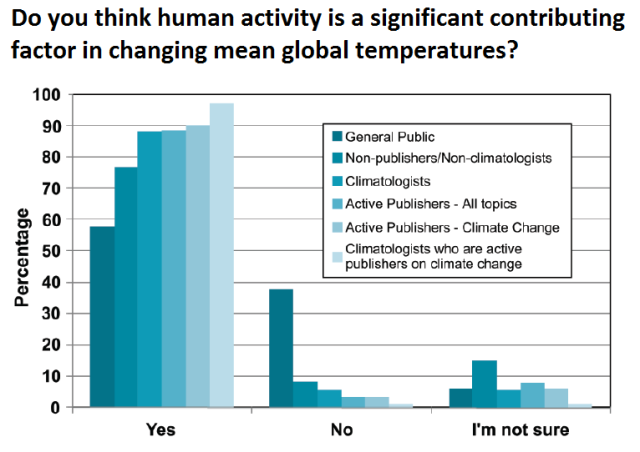 In the summary graph included at the beginning of this piece, the most important support for a consensus is what the landscape of scientific papers tells us. The next best indicator are the organisations’ positions. Nevertheless, scientist views can also be of interest, and to represent them I chose the datasets that incorporated an aspect of relevance in their analysis. There are two – the Doran and Zimmermann (see the graph above) and the Anderegg surveys. Incidentally, they arrive at the same degree of support among the actively publishing climate scientists (97.4% and 97-98 %, respectively).

What does all this tell us?

I understand that there is an uncertainty included in the wording of the consensus. This uncertainty, and the complexity of a topic such as global climate, probably explains why there is some room for the vocal movement of skepticism. According to the IPCC it is with 95 % certainty, or ‘extremely likely’, that global warming is mainly caused by human activities. Science as a process holds itself to such scrutiny that it can’t ever be completely sure about anything – one can only speak of different degrees of support as judged by looking at the evidence. This ‘science speak‘ may feel iffy for many people, as it always leaves room for doubt. But science should not be arrogant, because the alternative would be terrible.

Likewise, there is a clear message for me here. I should not be so arrogant as to claim that I know we should listen to a different line of reasoning than that expressed by the consensus of the ever-doubtful community of scientists. They say that the climate seems to be warming and will keep doing so if we continue emitting too much CO2.

To go against that, I should come with a whole body of new research that gives evidence of the contrary. Despite several long discussions with climate skeptics I haven’t uncovered such a body of evidence.

Any place in time is only the starting point for science, however. We shouldn’t work to polarise the debate to the point that scientists will be attacked for any criticism they make of the uncertainties of specific practical predictions of some of the climate scenarios.

Scientists will continue their attempts to uncover how exactly climate change is happening, what we can do to stop it, and what its effects on different parts of the globe, and aspects of the environment, will be. We should not make this discussion about whether AGW is happening or not, we should follow suit, and ask ourselves the interesting questions: can science tell us what the most tangible impacts will be? How should we best prepare for them? What solutions can best help us mitigate the effects?

For more on the topic of climate, you can find other pieces over at Climate and Energy. If you would like to ask a question or have a discussion in the comments below, you are very welcome, but please take note of my Commenting policy. In a nutshell:

Cell Biologist, science communicator, an agricultural and biodiversity analyst, and a fiction writer.
View all posts by Thoughtscapism →
This entry was posted in climate, consensus, environment and tagged Nasa. Bookmark the permalink.

10 Responses to Is There a Consensus about Climate Change?