Risk In Perspective: Population Risk Does Not Equal Individual Risk

Posted on April 4, 2018 by Thoughtscapism 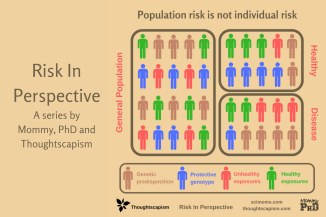 This series is a collaboration between neuroscientist Alison Bernstein and biologist Iida Ruishalme. Errors in risk perception are at the core of so many issues in science communication that we think this is a critical topic to explore in detail. This series is cross-posted on SciMoms and Thoughtscapism.

Population risk is not the same as individual risk

We tend to think in very small sample sizes (after all, what happens to me and my family must be most important, right?) and not in terms of populations (which is how epidemiological statistics are calculated). However, scientists measure population risks. We, as consumers, assume that reports of population risk translates to the same amount of risk for individuals. But it is not that simple and this part of risk assessment is not intuitive at all.

Individual risk is a flawed concept

If something is reported to increase risk of disease in a population, does that mean that you or me, personally, will have a higher risk from exposure to this substance? Not necessarily. In fact, risk is, by definition, a population-based measure. The very idea of extrapolating a population level-risk down to a personal one is highly flawed, as described by Dr John W. McEvoy in Risk and the Physics of Clinical Prediction. In an interview about predicting individual risk of heart attacks based on population-derived risk factors, Dr. McEvoy said:

…the concept of individual risk applied — truly applied — to any given person is an oxymoron. Risk for an individual is like a square peg for a round hole. We can never know, or estimate, one person’s risk. In fact, if you do the math, the confidence interval for a given risk estimate in one person would range from a 0% to a 100% chance of a cardiac event. Thus, risk is not ‘personalized’ and I think of risk as a ‘group-phenomenon’.

This ideal of personalized risk assessment is, of course, the ultimate goal of precision medicine and exposure science. At this point in time, however, we are far from being able to make these predictions for individuals. 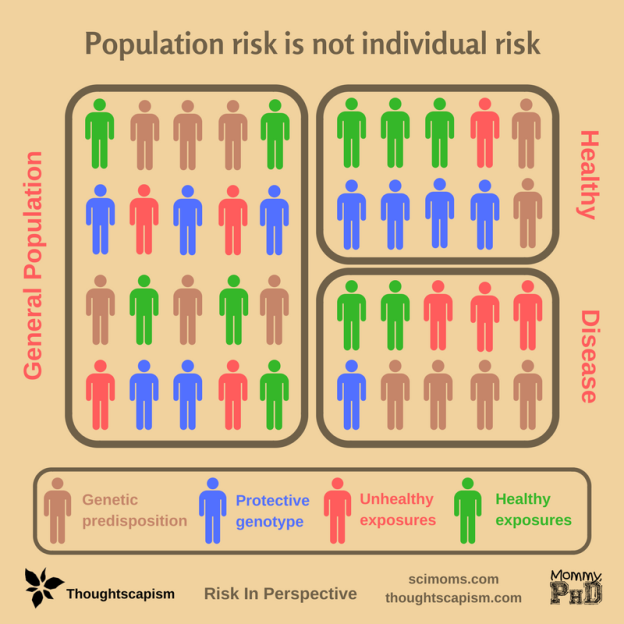 The graphic above illustrates that many factors influence risk for disease. Genetic variations may have a positive, negative, or neutral effects on development of disease. Exposures (including lifestyle factors) can also have positive, negative or neutral effects. By looking at large groups of people, epidemiologists can detect differences in the percent of people in various subgroups (by genetics or exposure) that develop a disease. However, from that population level data, it is not possible to predict an outcome for any specific individual within that population.

For a simplified example: if we look at blue people in the graphic who have a protective genotype against the disease, we see that there is a 4-fold protection conferred by this genotype (4 people with the genotype are healthy and 1 with the genotype has the disease). However, of these 5 people with the genotype, we do not know who will develop the disease. While these numbers tell us about the risk in the general population, we cannot pick one specific person from the general population and know if that person will develop the disease in question. (Note: there are some exceptions to this – monogenic diseases with Mendelian inheritance patterns being the most obvious exception.)

Epidemiology is more complicated than this simplified example because many diseases and traits are influenced by multiple genetic factors and multiple exposures, resulting in a complicated combination of positive, negative and neutral factors. Teasing apart those factors is a very important part of epidemiology.

What’s an individual in a population to do?

On an individual level, it is important to remember that many risks can be mitigated by encouraging potentially beneficial exposures that counteract the effect of potentially harmful exposures. If we focus on these big beneficial choices that we can control, we can mitigate many of the possible risks from exposures that we cannot control, as explained by Dr. Robin Whyatt on the NIEHS podcast about exposure to pthalates in pregnancy.

People are exposed to a lot of different compounds but we know that eating a really good diet during pregnancy is absolutely critical and has enormous beneficial effects, that taking prenatal vitamins is very beneficial and probably the key thing in terms of a child’s development is stimulation of the child. Read to your child. Play with your child. Talk to your child. All those things are just incredibly important and probably have much more effect, positive effect than these chemicals are having negative effects. So it’s really important to keep this in perspective. This is one exposure. It’s worth trying to avoid, but you can do a whole lot to help your child by the way you eat and by how you play with your child.

Focusing on these ‘big picture’ risks, at both the individual and population level, that are within our control can actually go a long way towards reducing and mitigating a wide variety of risks, both known and unknown.

A look at the overall landscape of a selection of modifiable risk factors common in the developed world. “Not to scale” means the sizes of the risks in the chart do not correspond to specific risk ratios, but rather they illustrate the relative impacts the risk factors have on our health. Note that many of the small risk factors in the weeds have the potential for both beneficial and harmful effects. More about this in the previous article Zero Risk Is an Impossible Dream.

If you would like to read more about different aspects of risk perception, please see the other parts of the series, which this article belongs to:

1) The difference between hazard and risk is a critical distinction.

2) All hazards are not equal.

4) Population risk is not the same as individual risk.

For more about risk perception, see the introduction to this article series. On perspectives to specific risks, such as those associated with food and medicine, you can read more under Farming and GMOs and Vaccines and Health.

Cell Biologist, volunteer science communicator, and fiction writer.
View all posts by Thoughtscapism →
This entry was posted in health, society and tagged risk. Bookmark the permalink.

5 Responses to Risk In Perspective: Population Risk Does Not Equal Individual Risk