Do we fear the right things?

I had the privilege of giving a public presentation at a large Finnish political discussion and debate fair Suomi Areena for the Finnish Ecomodernist Society in Pori a few days ago. (Finnish readers can view the presentation here – skip over to the 03:01:30 or 02:15:00 depending on the version, to watch my 25 minute live televised presentation.) This year’s theme at the fair was safety, and the point of my talk was to look at things we fear, things that are risky, and where these two meet – or don’t meet.

As risk researchers have often pointed out (outlined in a paper about the ‘risk perception gap’, also discussed in an article by risk consultant David Ropeik over at Undark: Know This First: Risk Perception Is Always Irrational), the strength of our reaction to a risk is not dictated by the actual measure of harm it inflicts. Instead, we react more strongly to risks which appear novel, artificial, and imposed – risks which we feel we do not personally have control over (discussed previously also in the article series by myself and neuroscientist Alison Bernstein, Risk In Perspective).

Our reaction to risks has a very patchy relationship to how much harm they actually cause. More from Prof Sandman at Nieman Reports.

The risk communicator Peter Sandman talks about this as the ‘Risk vs Outrage’ relationship. Whether we measure risk as harm to health, as fatalities, or environmental harm, the outrage does not significantly follow the actual measured harm, in fact, the correlation is often around 0.2. On a scale zero to one, zero would mean no correlation whatsoever (dots would be so scattered that there wouldn’t be even the slightest indication of a trend-line), and one would be perfect correlation (the dots would align as a line from lower left corner to upper right). Scientifically speaking, for us to say that two things correlate, it is commonly considered necessary to find a relationship of at least 0.8 between two factors. The value 0.2 is so low it means that the size of risk is not a meaningful predictor of the amount of outrage that risk may elicit.

As professor Sandman puts it at Nieman Reports:

To demonstrate this tendency, I decided to give the audience a chance to try to sort out a set of real or perceived risks, where some of the perceived risks cause a great deal more outrage than the real ones. I let them test their knowledge of real versus mythical risks in a quiz about causes of cancer, inspired by an English study, out earlier this spring, which found belief in mythical cancer causes quite common. I chose seven of the largest modifiable risk factors along with seven mythical causes.

I wouldn’t be much of a scientist if I didn’t have a thing for data, so finding myself with a small set of data on Finnish people’s beliefs about cancer on my hands, I wanted immediately to post its result statistics for people to see. But first, if you’d also like to play, try it out yourself! Here’s the quiz: 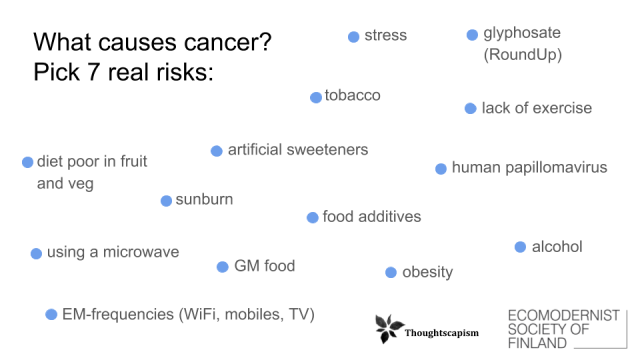 Translated version of my Finnish quiz at the fair, correct answers given right below.

Before presenting the slide with the answers, let me start with some stats from the 34 answers we received from the audience and visitors to the Finnish Ecomodernist tent at the fair. A few observations:

Our audience filling in the quiz, and the lady in black asked a very good question.

As the European Code Against Cancer underlines, tobacco is by far the largest modifiable cause of cancer. Obesity is another large factor. People often recognise those two, as well the risks of alcohol and sunburn correctly. In the study, however, less than a third knew about the increased risk of cancer from too little fruit and vegetable intake or lack of exercise.

Note, even if we do know that these things carry a greater risk of cancer,

very few of us get honestly upset or worried about being, say, a bit short on exercise, or skipping on their greens, or having a regular drink of beer or wine.

These voluntary, familiar things don’t set off any blinking lights in our head, their risks are merely acknowledged as pretty boring facts of life.

The thought of having unknowingly ingested an unfamiliar substance, however? The sound of that has the power to make us feel thoroughly uneasy, no matter how small the potential for harm may be. Simply hearing the word ‘chemical’ may be enough to trigger an unconscious fear reaction. The warning light is turned on in our brain at the sound of such a threat, without waiting to check with the analytical part of our brain whether the level of risk is deemed small or large – to be on the safe side, it’s already flashing.

If you look at the list above, you can see that belief in several of the mythical factors act to increase our insecurity toward food. Considering the importance of eating more fruit and vegetables for improved health, anything needlessly restricting our motivation to consume more of them in our diet is particularly concerning. I’m looking at you, stupid, ubiquitous tomato-syringe stock photos. Not to mention Environmental Working Group and other organic marketing efforts that use fear of fruit and vegetables as a sales tactic.

Edited to add: you have probably seen sensational headlines implying the contrary, but glyphosate does not cause cancer. There’s a large scientific consensus on that.

How did our Suomi Areena visitors do?

The results of our Finnish audience show a higher recognition of the real causes of cancer in comparison to the actual study, which, on the top of my head, could simply be because of a different participant selection. Some quizzes may also have been returned after seeing the correct answers (though only five quizzes had picked the 7 out of 7, and at least one of those we probably received before the talk). 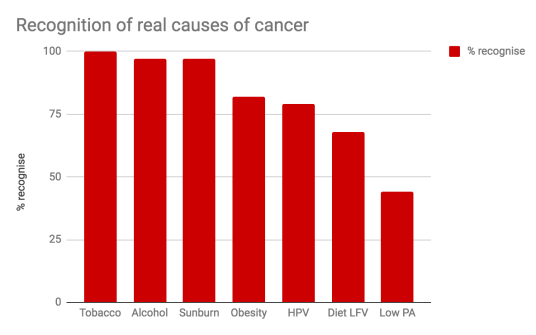 Diets low in fruit and veg (‘Diet LFV’) were recognised as a concern by about two thirds of the participants, meanwhile, the least known factor was lack of exercise (Low Physical Activity).

The rates of belief in mythical causes of cancer in our little quiz were actually in a similar range with those in the study, at roughly between 15-40% endorsement rate, and the myths of food additives and stress as causes of cancer were the most common beliefs in both cases. 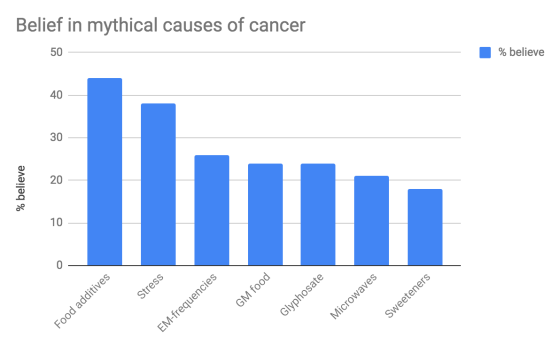 While belief in stress being a risk factor for cancer may be a bit misguided, prolonged stress can increase risk of many other health concerns, including harmful behaviours such as smoking, drinking, and other unhealthy life-styles factors, which do in turn raise our cancer risk – in other words, it is not too bad a thing that people recognise stress as negative for health, even if they wouldn’t be completely clear on the specifics.

Food additives, however, receive a bad rep unjustly, as they generally improve our food, help save environmental resources by improving shelf-life, and make food safer for the consumer. More about that in a great article and documentary series about food additives on BBC here: The day I ate as many E-numbers as possible.

What do these cancer misconceptions have to do with ecomodernism?

Firstly, ecomodernism is a movement that cares not only about environmental issues, but also puts a great value on human well-being – anything that misleads us about choices regarding our health is problematic in that regard. Furthermore, unfounded fears of GE foods or glyphosate also stand in the way of wider adoption of farming methods which can reduce the environmental burdens of farming – slowing the advances made in reductions of more harmful pesticide use, fuel use, erosion, and nutrient run-off. This makes misplaced ideas of risk a true double-whammy – a negative for both, humans and nature.

If we could get more people to look past sensational headlines, to think twice instead of doubling down on their first impressions about whether something truly is risky, it would go a long way helping us make the world actually a safer place, for both humans and a great number of other magnificent and unique organisms which are on this earth with us.

Luckily the many people who stopped by to talk to us during our days at the fair were very positively receptive to our message. I think the time is ripe for an evidence-based, solution-oriented movement that will bring together people who care genuinely for the future of all living things.

If you are interested in other environmental or health topics, you can find my other pieces under Farming and GMOs, The Environment, and Vaccines and Health. If you would like to have a discussion in the comments below, please take note of my Commenting policy. In a nutshell:

Cell Biologist, science communicator, an agricultural and biodiversity analyst, and a fiction writer.
View all posts by Thoughtscapism →
This entry was posted in biotechnology, health, nutrition, psychology and tagged cancer, risk. Bookmark the permalink.

4 Responses to Do we fear the right things?