Posted on October 10, 2019 by Thoughtscapism 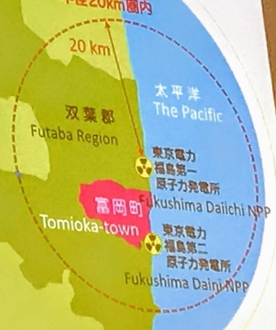 I want to share with you the touching testimonies of a teacher and students of Tomioka town in Fukushima prefecture, whom I had the privilege of listening to while I attended a radiological risk communication workshop at OECD Nuclear Energy Agency’s headquarters in Paris in September 2019.

Teacher Yoshiko Aoki and high-school student Moe Harada had traveled from Japan in order to give us their personal accounts of how their lives were disrupted by the tsunami, the Daiichi nuclear plant accident, and the events that followed.

Ms Aoki, a former teacher and principal of the school in Tomioka town took the floor first. The town is located 12 km from the Fukushima Daiichi plant and just next to its sister-reactor, Daiini.

Yoshida Aoki opened with a photo of Tomioka and cherry blossoms.

“I’m Yoshiko Aoki,” she said, “and I’m sharing with you the experiences of people who cannot go back to their homes in Tomioka town. My talk can become quite emotional.”

Her gestures and words had a very understated Japanese air, but the gravity of her presentation was conveyed clearly with a slight nod of her head and a stillness in her eyes.

When she began talking of the great Tōhoku earthquake and tsunami, I had tears in my eyes. No one fails to remember the accident at a nuclear plant, but how often do we forget that nearly 20,000 people died due to the chaos and flood waves following the worst earthquake ever to hit Japan? 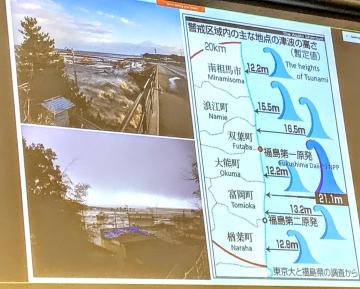 Large areas of the coast, including the Tomioka train station, were simply swept away, and only rubble remained. The following day the inhabitants received an official message from their government: leave immediately. The 16,000 people of Tomioka all got out at once and headed, as instructed, toward Kawauchi in the mountains.

The only road the people could use was packed full of cars. It lead past the Daiichi power plant, where a hydrogen explosion was about to take place – on the left in the photo. Ms Aoki asked us to consider what might have gone through their minds. 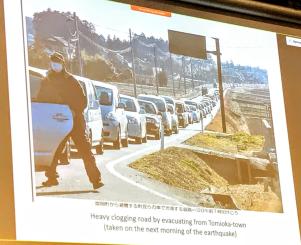 The evacuation day after the tsunami

The one thing they all had in common, she said, was this thought: “I’m sure we can come back soon.”

But up to this day, there are still people who have not been able to return to their homes.

“What if they knew they couldn’t go back?” Aoki asked us. “Would something have been different?” In their hurry, precious belongings were left behind.

“But what are the most precious things that you would want to bring with you? Family, of course,” Aoki said. “But also your work. The land and houses inherited from your ancestors. Your garden. Pets. The neighbourhood you live in. Years have gone, and you can’t get these things back.”

The people of Tomioka left, without understanding what was going on and when they could return. Aoki told us that for a month, they did not really know what was happening. They went from their peaceful lives by the sea to the existence of one temporary housing to the next, where the only personal space you had was your blanket.

“Each person had their dreams for the future, but everyone’s prospects changed.”

Returning home and beginning to heal – with exceptions

Within Tomioka town there are still areas that are off-limits, barred with metal fences.

In the last two years, Aoki was happy to tell us, things have finally begun to change: on many areas, evacuation order has been lifted. However, all of Tomioka is still not open: “There are barriers in our town, where people are forbidden to go.”

Nevertheless, on the 1st of April 2017, Aoki moved back to Tomioka, and more than a thousand have returned with her. “People are coming,” she said. “The train station is rebuilt.”

Many of her words have stayed with me ever since, but perhaps none as keenly as the ones she said next:

“It’s not easy to get back the lost years of trauma,” she continued. “People coming together can begin to heal.” It’s a lot of work, to begin to rebuild after the tsunami and the years of abandonment.

“There are a lot of inconveniences in the town. But I don’t feel uncomfortable there. I am happy there. If you come to Japan, please come to visit us.”

The earthquake and evacuation seen through the eyes of a child

Next, Ms Aoki gave the floor to Moe Harada who had been eight years old at the time of the accident. Ms Harada spoke fondly of her family’s home in Tomioka, a rural town she described as being rich in nature. She said: “I’ve spent half my life in Tomioka and half in Koriyama City, 80 km away.” 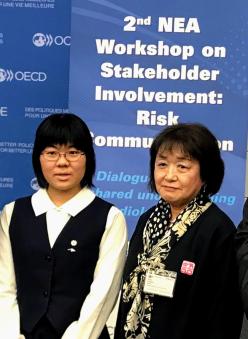 Her school class in Tomioka did routine drills for earthquakes, but when the real thing happened, it was quite something else. The epicentre was only 2 km away. Everything shook, everyone was scared.

I can’t imagine what that must have been like, and it can’t have gotten any easier when her grandparents did not show up to pick her up after school. Listening to her recount the events of the day, the thought of my own eight-year-old daughter waiting anxiously for us to come for her after being shaken by a disaster was difficult to bear.

Luckily Harada’s grandparents did come for her later in the evening – their homes, however, had been washed away. They took her to spend the night in the local gymnasium. Being whisked away in the evacuation the next day, and the weeks and months that followed, were a very painful time for Ms Harada. “My support should come from new friends, but I was shy and could not integrate into my new school in Koriyama. I felt lonely.”

She spoke of the concept of one’s own native town, or ‘furusato’, of how important it was for her not to forget her local identity. “I want to communicate this connection to others. I did not want to forget my home.” When a new campus, Miharu, was opened in Koriyama for the children from Tomioka, Harada felt she found a place where she belonged. “The Miharu campus is my spiritual mainstay.”

After Ms Harada had spoken, a group of students dialled in to our conference room in Paris directly from Fukushima.

“It can be safer to stay home after a nuclear accident,” they said. “But here in Fukushima, people were forced to evacuate instantly.” In their words I could hear an echo of the hurt expressed by the women who had spoken before them, and this time, it was accompanied by an unusually explicit criticism by Japanese standards (at least from what I understand of their culture).

“Medical situation should be taken into account – if there are hospitals that can accept patients that are moved,” the students pointed out. There’s heavy substance to their criticism. The hasty evacuation lead to many deaths among the sick and elderly. Since the radiation exposure was relatively low, the large-scale prolonged evacuation itself has caused more harm than good to the inhabitants.

The students questioned the wisdom of the all-encompassing nature of the Japanese decontamination efforts, and called for a reflection of what is truly necessary. “It’s more important that people can return to their own homes. We should balance the decontamination effort with how much effect there really is.”

The children ask us to learn to know the real Fukushima

They concluded their call by an innocent plea, that was all the more sincere coming from children who have had to come to grips with a world that must have been stressful and confusing, and who have learned first hand the hard toll of damaged reputation and misinformation:

“Everyone should try to know the real facts about Fukushima.”

I feel that we owe these children as much.

One of Aoki’s last slides: it’s not the radioactivity, but the wrenching changes imposed onto people’s lives that is the real tragedy.

Still wiping my eyes after the presentations, before I quite knew how it had happened, I was the first one of the audience with a microphone in my hand, to address Ms Aoki and Ms Harada. I thanked them, with a somewhat shaky voice, for sharing their stories.

I asked international radiological regulatory community in the room to make good of their word to listen to the voices of the public, so that we could learn from past mistakes, and make sure that something like this would never happen again.

It was people who gave the order to evacuate. It’s people who still keep so many of the Fukushima residents from returning. People who have reacted with such fear as to rip so many from their homes, causing chaos and suffering far unmet by anything the radiation could have accomplished.

I felt that I needed to answer the student’s plea: to try to learn the real facts about Fukushima, and put the risks of radioactivity in context. I can’t help but think that we as societies should be taking a hard look at efforts undertaken in the name of public health. Shouldn’t the principle ‘first, do no harm’ apply just as much, if not more, for population health measures?

In the next article, I look at the restrictions still in place on many residents of Fukushima, and offer further reflections on what level of risk justifies denying people their homes? It turns out that actual magnitude of risk has very little to do with where we draw such lines.

For further articles on radiation, you can read my pieces: Radiation and Cancer Risk – What Do We Know? and Radiation Exposures at a Glance. More on nuclear power found under Climate and Energy.

Cell Biologist, science communicator, an agricultural and biodiversity analyst, and a fiction writer.
View all posts by Thoughtscapism →
This entry was posted in nuclear, psychology, society and tagged children, Fukushima, radiation, risk. Bookmark the permalink.