How Does CO₂ Warm the Earth?

Perhaps you’ve heard that the moon day is very hot (past boiling point) and the moon night is really cold (about 150-200 C below freezing, or more than twice as cold as ever measured on Earth – Antarctica -83 C). Have you ever wondered why? We’re both just as far from the sun. So what accounts for the difference?

The answer is: the atmosphere and the greenhouse effect. Let’s take a quick look at how that works. 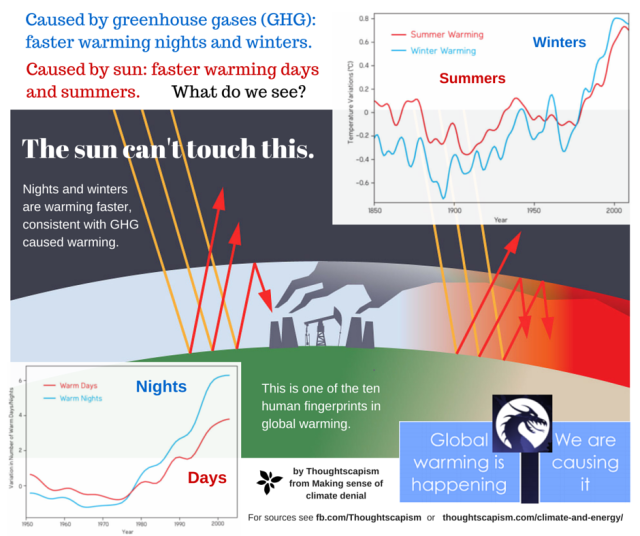 Infographic summary of this post. Materials from the course Making sense of climate denial

While the full range of solar radiation hits us, most of it is absorbed and turned into heat. The warm surfaces then radiate this heat – they give off radiation in the infrared spectrum. But here’s the crux. The molecules in the atmosphere that didn’t much hinder the passage of visible light before now become a veritable wall for the outward escaping rays of the infrared spectrum – they meet the greenhouse gases. These gases, such as carbon dioxide and methane, readily absorb the infrared radiation. They will then re-emit much of that heat once more (in all directions, no longer only outward), only for it to be reabsorbed by the neighbouring greenhouse gas molecules and so on. A significant portion of the heat becomes effectively trapped in this absorption limbo, and the rate at which the heat can escape into space slows down. This all means that thanks to greenhouse gases, we get to keep more of that heat.

Ben Santer, who was the convening Lead Author of Chapter 8 of the year 1995 IPCC Report, elaborates on how this manner of warming has distinctive characteristics quite different from what we would expect for warming derived from increased radiation from the Sun, for instance. This excerpt is from an interview with him, included in the online course Making sense of climate denial:

There’s a common myth that global warming is caused by the Sun rather than humans. That myth fails to account for the available evidence. If the Sun were responsible, we would see an entirely different pattern of global warming. In that scenario, we would expect to see the Earth warming most when sunlight is bombarding the surface the most – during the daytime, and during the summer season. That means that if the Sun were responsible, we would see days warming faster than nights, and summers warming faster than winters.

So when the increased capacity to retain heat in the atmosphere is to blame for the change in temperature, then the trend of warming will become even more noticeable during the times when the suns rays are not present – the time when we are dependent on the heat stored in the atmosphere.

What is it then that we see in the data? It demonstrates quite clearly that winters are warming faster than summers. 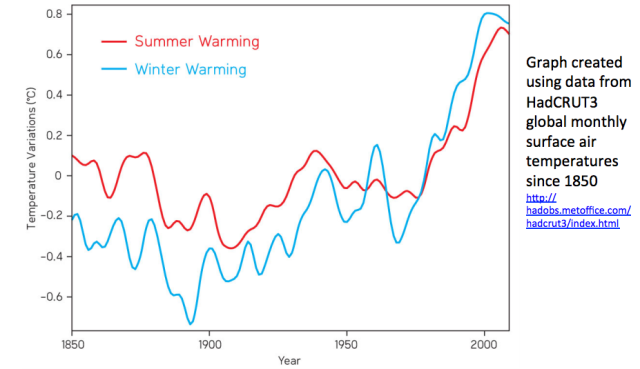 Graph by Dana Nutticelli from a lecture at Making sense of climate denial. You can find the data from HadCRUT3 here

And the nights are warming faster than the days. 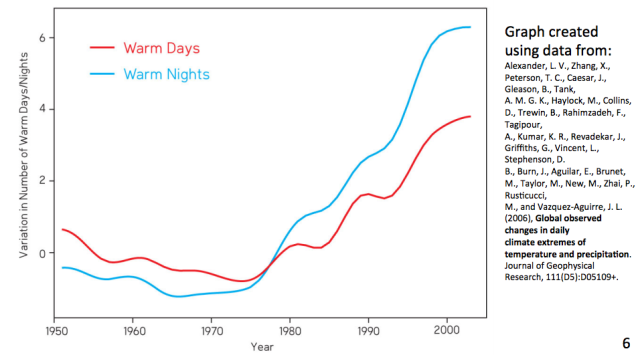 This graph was provided in a lecture by Dana Nutticelli as a part of the course Making sense of climate denial. You can find the referenced paper Global observed changes in daily climate extremes of temperature and precipitation  here.

When you look at the patterns of intensity in the solar radiation and earth temperatures side by side, since the 1960’s they also shows a trend of a slightly cooling sun while the earth is warming. It all points to the heat-trapping effect of the greenhouse gases. 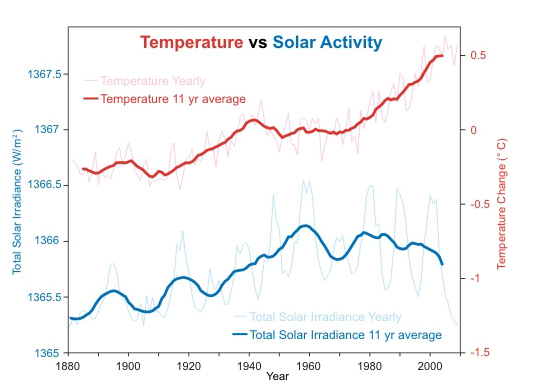 For the sources of this data please see Skeptical Science

These phenomenon of faster night and winter-time warming are just two examples among the 10 or so specific characteristics which scientists use to determine the cause of the current warming of the climate. They are also known as the human fingerprints in global warming. Here they are: 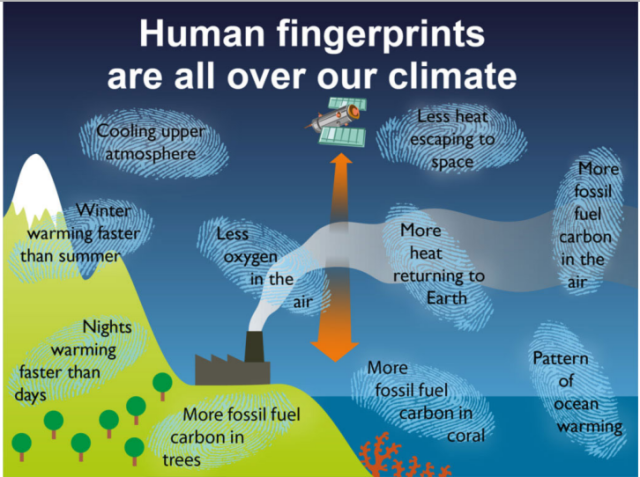 For more information on human fingerprints, you can see Wikipedia Attribution of recent climate change or Skeptical Science

I will do my best to continue to present some of the central concepts of the above fingerprints as well as the core themes on the topic of climate change, but if you want to know more, please visit the resources I have collected on my Climate and Energy page, or join us at the massive open online course.

EDIT: For those who wish to know more about the graphs presented in the infographic, or read more in-depth about how global temperature records are built and evaluated, there is a wealth of research on the topic. The statistical confidence of the temperature record is an important topic and I certainly encourage everyone to read more to gain an appreciation of the immense amount of work and scientific analyses that have gone to evaluating the reliability of temperature records.

More on uncertainties in the data-set used for the Winter-Summer graph found over at Met Office Hadley Centre observations datasets -website. (also referenced in directly under the graph)

From there you can read for instance that:

Because there is no correct method of estimating the global average temperature from the sometimes sparse observations, the differences between the analyses can be thought of as an additional uncertainty that would be impossible to assess if only a single global temperature analysis existed. Vose et al. 2005 (An intercomparison of trends in surface air temperature analyses at the global, hemispheric, and grid-box scale, GRL) showed that the largest differences between the land surface air temperature data sets arose from the way that the gridded data were averaged to obtain a global value. For data sets which combine land and ocean data there are additional uncertainties, for example how to estimate temperature anomalies over the polar regions. Despite the differences in approach, the average correlation between the three major global temperature data sets is greater than 0.98.

The Night-Day graph on the other hand is based on the paper Global observed changes in daily climate extremes of temperature and precipitation (also referenced under the graph) They conclude:

[53] 2. Using a fixed set of complete grid boxes, we find that all indices exhibit a significant change between 1951–1978 and 1979–2003. Warming is apparent in all seasons although March to May generally exhibits the largest change and September to November the smallest change. Over nearly all parts of the globe both tails of the minimum temperature distribution have warmed at a similar rate. Maximum temperature extremes have also increased but to a lesser degree.