Three Ways Science Could Improve the World through Rice 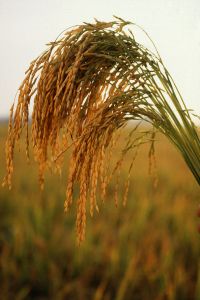 The culprit itself. From Wikipedia

Little did I know that rice, that innocent bag of grains sitting in my pantry, is warming the planet, inadvertently contributing to millions of deaths of women and children worldwide, and slowly poisoning me with arsenic. But I don’t want to contribute to fear-mongering, so let me be real: I probably don’t need to worry too much about the arsenic.

Before I came to that conclusion, I did some reading about what arsenic was doing in my rice. I learned that when FDA increased their testing of rice in the past 4 years, it found levels of arsenic at about 2.6 to 7.2 micrograms per serving. To put that in perspective, this is a value well above the allowed limit for arsenic in water – at least in concentration. If one serving of water is considered, a cup of water would need to have less than 2.5 micrograms of arsenic. Of course we need more servings of water per day (let’s say 8 cups or 2 liters, max 20 micrograms), and most people don’t have 5 servings of rice per day (13 – 36 micrograms), so it’s all relative. FDA also assures that these levels are not a cause for worry in the US. Some of the world’s poor, however, do live on nothing but rice (several servings per day if they are lucky), and if they are unlucky, in areas with naturally high levels of arsenic in the water. Clearly it would be good to find permanent solution to lowering the levels of arsenic in such a basic staple. The stuff in high concentrations is a world renowned poison, after all.

Why does it get into the rice in the first place? EPA tells us that sources of arsenic include erosion of natural deposits; runoff from orchards, as well as runoff from glass and electronic production wastes. As FDA puts it “arsenic is a naturally occurring contaminant, and because it’s in soil and water, it’s going to get into food”.

Arsenic happens to get absorbed into rice particularly well, because the form it’s accessible in on rice-fields (arsenate) resembles the form in which silicon is taken up by the rice plants. Silicon is used to build the sturdiness of its stems. Getting arsenic in its place is a problem for the plant too. Tough luck.

There’s some cause for optimism. While learning about these surprising issues with rice, thankfully, I’ve been learning about even more surprising solutions to them. Promising research on this issue was published just last year (PDF). As reported here by The Scientist:

Researchers based in Korea and Japan have shown that a rice transporter protein called OsABCC1 prevents arsenic from damaging plant tissues by sequestering the element in vacuoles. Because of this, potentially harmful arsenic remains in these cellular waste containers rather than building up in rice grains.

That is great news! Science could help me truly not worry about arsenic in my rice. In the meantime, the message seems to be: eat a varied diet and you will be fine. So I will get on instead with the really bad problems with rice.

What problems? Like how the climate toll from rice cultivation is on par with cow farts. 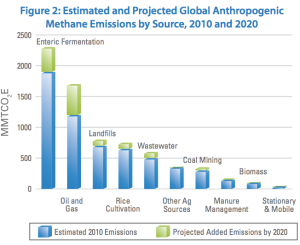 Take a look at the global methane emissions chart: contributions from rice cultivation are big enough to feature in the top four. The sum of methane leaks from all ruminant farm animals’ digestive systems’ (AKA Enteric Fermentation) is still by far the biggest anthropogenic source, since a cow emits a whooping 250-500 litres of methane per day. Emissions from oil and gas are a large second. But on the nearly shared 3rd and 4th places are all the world’s landfills and the cultivation of one single crop: rice.

Why is this a problem? Methane, though emitted in much smaller amounts than carbon dioxide, and receiving far less attention, is in fact a potent greenhouse gas – 30 times as potent as carbon dioxide. Wikipedia quotes IPCC on that:

The IPCC Fifth Assessment Report determined that methane in the Earth’s atmosphere is an important greenhouse gas with a global warming potential of 34 compared to CO2 over a 100-year period (although accepted figures probably represent an underestimate[61][62]).

Methane emissions are no joke. I may have been clueless to the emission status of rice, but plant scientists sure haven’t. Last week, in fact, there were big news about a paper in Nature describing a new variety of rice that eliminates more than 90 percent of those emissions. It quickly became my new favourite science victory. Climate change combating rice. Awesome. To better illustrate what an awesome impact the methane-reducing rice could have, I have compiled the data into another infographic in my GMOs and greenhouse gasses series: 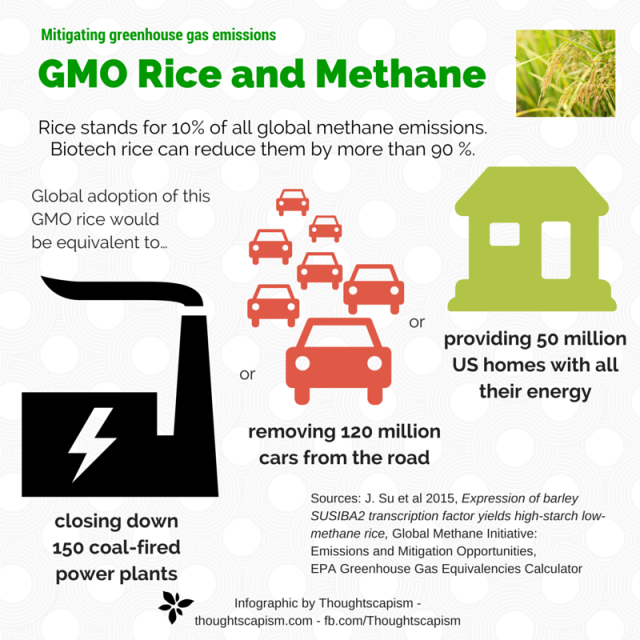 The potential of this discovery is mind-boggling. Comparing that to the yearly climate mitigation effect that GMO crops have at present, equivalent to closing down 7-8 coal fired power plants, it’s huge. This rice alone could do that ten times over, and twice again.

So how does the rice do it? And why is so much methane emitted from rice cultivation in the first place? When we consider many other methane sources, like ruminant’s stomachs, or landfills (or compost for the matter – read more about by Steve Savage on the shocking carbon footprint of compost), the key are anaerobic methane producing bacteria, or methanogens.

Methane is a natural byproduct of the metabolism of bacteria at work in digesting plant material, called methanogenesis. These bacteria are why cows and other ruminants can live on such tough plant materials (grass stems and leaves) which are near useless to most other animals. These bacteria work at conditions where there is no oxygen, in fact, oxygen is largely fatal to them. This brings us to rice, or more specifically, flooded rice fields, or paddy fields. In the protective anaerobic environment – the drowned soils of these fields – methanogens are hard at work munching roots and other plant material, bubbling away with methane.

Back in 2002, a paper began looking at the issue of rice-field -derived methane more closely motivated by just this climate impact:

Microbial production in anoxic wetland rice soils is a major source of atmospheric CH4, the most important non-CO2 greenhouse gas.

They saw that during the wet season, the formation of spikelets – the flowering, grain-forming parts of the rice plants – was reduced, and the methane emissions were high. They got higher still, when they artificially blocked the plant’s ability to form spikelets. Why? When the plant could not store its starches in the developing rice grain, they went increasingly to the lower parts of the plant, the roots, and more starches became available for the bottom-dwelling methanogens. It seems that wetter years are bad in particular for spikelet formation, and simultaneously, with no risk of drying out and being exposed to oxygen, that’s when the methanogens feast and thrive (and the warmer the better). 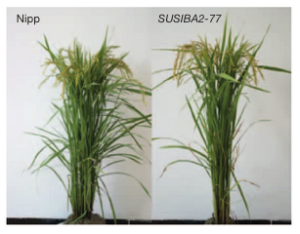 Nipp is the control, SUSIBA2-77 is the modified rice. The biomass profile is visibly skewed upwards.

This opens a win-win prospect for plant scientists – what better way to reduce the starch content of the roots (and thus emissions), than to promote the plants ability to store its goods in the grains – to improve its yields? From the 2002 study:

Fast forward to today. Last week the big news were out. The SUSIBA2-rice is here, as presented in Nature. The new engineered rice promotes more biomass accumulation above ground, away from reach for the methane producing bacteria. This results in 90-99.7% lower methane emissions, while also increasing yields – up to 1.5 times as much seeds per plant in weight and 10 % higher starch content in the grains.

If you look at their model below, they describe greater “sink strenght” in the seeds and stems. “Sink” describes a plant part that is a sugar sink to differentiate from the sugar sources – photosynthesis locations are the sources, storage compartments are sinks. 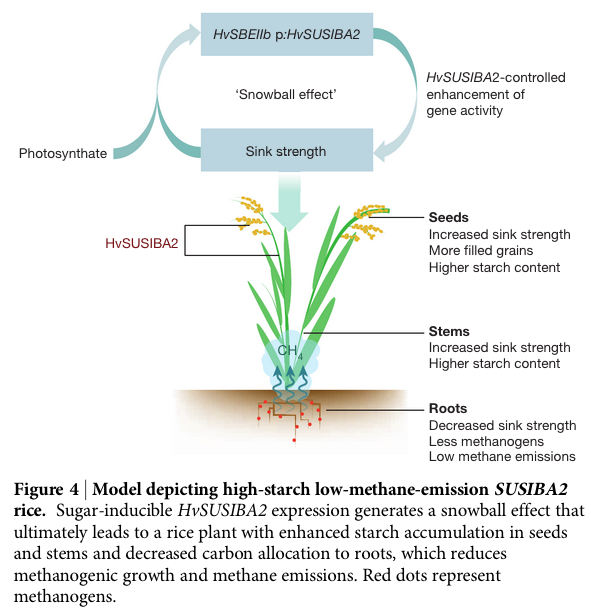 Higher starch content in the stems and the seeds, less in the roots for the bacteria to feed on

I am thrilled by what this rice can do. Optimistic news pieces about it are popping up left and right. So what are we waiting for? Let’s amp up large scale testing, put some public financing into this and make it an international project of climate mitigation. In a few years, or a decade, we could be growing vast paddies of climate combating rice.

Well, not so fast. No matter how good the prospects, sometimes simply having a better solution is not good enough. It can be hard for people to follow the world of science, and when faced with a novelty, they may go instead with their gut reaction.

Maybe you caught that I never explained that third problem I listed – the “inadvertently contributing to millions of deaths of women and children worldwide” part. That problem illuminates this point very well and reminds us that changing the world is not just up to science. It’s also about impressions and politics.

Why is rice contributing to so many deaths?

In Asia, many of the very poor depend on a diet of predominantly rice. That’s the cheapest and best they can get. But rice lacks some vital ingredients, often leading to a serious vitamin A deficiency. Let me quote this great summary on that:

Three billion people depend upon rice as their main source of food of which 10 percent are at risk for vitamin A deficiency. Vitamin A deficiency (VAD) weakens the immune system, increasing the risk of infections such as measles and malaria. Severe deficiencies lead to corneal ulcers or blindness. According to the World Health Organization, VAD is the cause of 250,000 to 500,000 children going blind each year. Half of these children die within a year. Additionally in Asia and Africa, almost 600,000 vitamin A-deficient women die from childbirth-related causes.

This is no small matter. What makes it heart-wrenching is that we have a solution. Independent scientists in a Swiss University created a rice with beta-carotene – the vitamin A precursor well known from carrot. The rice has a yellow colour, and is called Golden Rice. It’s a non-profit project, and for more than 10 years, the scientists have wanted to give it to the farmers of the developing world to help alleviate disease and suffering (see Golden Rice opposition cost $2b and 1.4m ‘life years’ over 10 years in India alone). But activists have sabotaged them out of not much else than fear and refusal to listen to scientific evidence (see Sorry Greenpeace, Golden Rice is a Win for Nutrition and Health and GM plants present low risk – say scientists).

A safe more nutritious variety of rice could help prevent millions from death and disability. Another modification of rice could protect them from arsenic accumulation. A third revolutionary discovery could help the globe by combating climate change.

We can make the world better with biotechnology. If people will let that happen.