Posted on November 19, 2017 by Thoughtscapism

In the aftermath of the controversial US panel on energy at COP23, Lenka Kollar was the only panelist who stayed behind and gave interviews to several camera crews. These included one with a pitbullish German reporter, whose demands for exact price of future nuclear energy on any number of different markets prompted me to write about a few curious themes I’ve witnessed in discussions about energy economics in: The Right Price for Saving the Planet Depends on the Energy Form. Lenka also gave another interview to Democracy Now – this material has unfortunately not seen the light of day so far.

Among the thinning group of people in the meeting room I had noticed a few familiar faces from the anti-nuclear protest which me and Eric Meyer from Generation Atomic had happened by two days earlier, with heated consequences. I recognised one lady, who had actually talked to us, and she got a turn to interview Lenka.

The New Mexican lady might be the one in the middle of the yellow ‘indigenous people against nuclear’ -themed banner on stage. The black-clad man who put the police on me is definitely in the crowd watching.

For background: this lady’s anti-nuclear fellows had threatened us with a beating, screamed at us, and shoved Eric around – you can read more about that in Anti-nuclear protesters get up close & personal, try to get me seized by the police.

She asked Lenka the very same questions about uranium mining which me and Eric from Generation Atomic had tried to answer the previous time. I was glad, this time, to hear her calmly listen to Lenka’s answers. Perhaps, just perhaps, she might realize that we must to look at the environmental harm from mining in context – in connection to mining required by every kind of energy production, for instance – to begin making fair comparisons on their impacts. As I summarised the topic in my piece on Nuclear Waste: Ideas vs Reality:

The true comparison between energy forms

If we are serious about protecting human health as well as that of the environment, we need to step above our gut reactions, our ‘we just know’ estimates on the problems of different energy forms, and we need start comparing all the external costs (all risks and health impacts) from each type of energy – estimates that take into account the impacts from mining, operating, and waste. 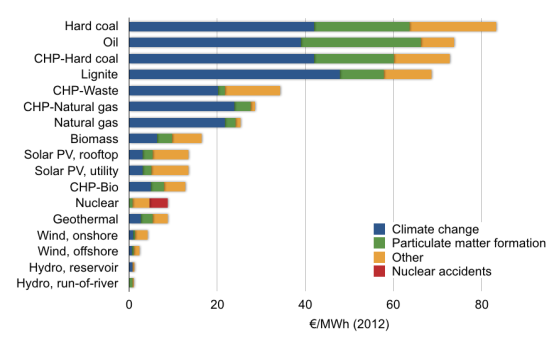 An EU-funded project Ecofys, also presented in the book Climate Gamble, and in the nuclear safety article by Janne Korhonen, has analysed the impacts and concludes them like this.

After interviewing Lenka, the New Mexican lady came over to me. She said she’d read my piece about the demonstration. I was genuinely surprised and thanked her for that. She told me I was a racist.

In the heat of the group discussion two days earlier, I had heard that she was from ‘Mexico’, and I mentioned this in my piece accordingly. It turns out that she had actually said that she was from New Mexico. I asked if she really thought I was a racist for not hearing her words perfectly amidst a group of people shouting on top of each other. It did not seem to change her opinion.

I said I would be more than happy to correct the piece with the accurate origin, and commented on how nice it was to be able to talk to her without all that shouting. She wouldn’t deny or confirm, instead, she told me that my source on the question of the World Health Organisation (WHO) conspiracy was bad. This had been the homework (as in, ‘Do your homework!’) she gave me at the demonstration: to find the source of her claim that the WHO was not allowed to publish information about effects of radiation – that they in fact were contractually obliged to ignore it, because of an agreement with International Atomic Energy Agency (IAEA).

I had updated my previous piece about the demonstration soon after its initial publication with a pointer to the origins of this story, as it was quickly shared with me by several readers. The link I added was to a summary page on the topic of this conspiracy theory, hosted by the RationalWiki project.

The New Mexican lady was not happy. “It is not even Wikipedia!” I kindly told her that the source was only as good as its references, and that this RationalWiki page presented in full context the entire text that was most relevant to the suggested conspiracy. A line from an IAEA document from 1959 had been cited out of context in purpose to create the misleading idea of a conspiracy of some kind (another friend told me the source of this theory might be Helen Caldicott herself – for more about Helen, read George Monbiot’s piece The unpalatable truth is that the anti-nuclear lobby has misled us all).

The RationalWiki page in question links to the 2001 WHO statement addressing this conspiracy claim and accurately named and quoted the document and linked to the IAEA – the page with the document has moved around, granted, but I could quickly find by typing the provided title in IAEA’s search bar. The exact quote presented on RationalWiki can be found on page 15.

Claiming that the WHO ‘ignores’ evidence on the effects of radiation is even more absurd if one does any actual reading on the topic. There was a joint effort by the WHO and no less than seven other UN bodies, as well as the Belarusian, Russian, and Ukrainian governments, dedicated to studying the effects of the Chernobyl accident. This was called the Chernobyl forum. The WHO has published extensive reports, together with the UNSCEAR, on both the Chernobyl and the Fukushima accidents – reporting less than 50, and 0 deaths from radiation, respectively. For Chernobyl they expect to see a detectable raise in the cancer incidence, among the hundreds of thousands exposed, eventually resulting in up to 4000 additional cancer mortalities. For Fukushima no increased cancer rate is expected.

An attempt by any one instance (like of the other UN body IAEA) to silence all these scientists and organisations on the topic of radiation, for whatever reason, is simply absurd. Other UN bodies are actually openly biased against nuclear power (like the UNEP), and for no evidence-based reason, nevertheless. They make no attempt to hide this – their censorship of nuclear industry is an open and ungrounded prejudice (no grounds are offered). I’m not claiming there to be any kind of conspiracy involved in that either – conspiracies would be orchestrated attempts to control something while keeping the fact secret. Any kind of large scale conspiracy, including control on hundreds if not thousands of doctors and scientists the world over, would be desperately hard to maintain – there has even been a scientific paper on the improbability of the existence of large scale conspiracies (reported here by the BBC).

I explained that linking to a page like RationalWiki was simply a user-friendly gesture: bringing the reader to a short page with the most relevant pieces of information was more useful than pointing them directly to the old document with a crappy font and pages and pages of materials that they should search through. That the WHO and IAEA documents were literally and explicitly the direct sources of that page.

It was rather difficult for the New Mexican lady to accept the sources to be valid, and she kept repeating that “as a journalist, you should really do better”. I appreciated being called a journalist, that had a nice respectful ring to it, but I had to work hard not to point out to her that the “Don’t nuke the climate” -leaflet she had handed to me, and the website it points to, refer to no scientific sources at all, while making any number of wild claims about nuclear power’s health impacts, and also claims such as ‘nuclear is not low carbon’ – when IPCC considers nuclear lower carbon than solar PV and about the same as wind – and nuclear ‘is too slow to deploy’ – when nuclear is the fastest documented method of decarbonisation in human history (the paper with the below graph here).

Instead I took a deep breath, looked her in the eye, and said:

Look, we both want the same things. We care about the health of our children and the well-being of the environment. We both care very much. The only difference between us is the question how can we best protect human health and the natural world. We have found different answers to how we best achieve those things.

She had a somewhat blank look in her eyes, but at least didn’t outright deny us both wanting good things. So I continued (in the spirit of one of my first blog posts, Why Science?):

To get at that ‘how’, even before we have to get anywhere near to a topic, whether it be nuclear power, climate change, pollution, health, medicine, or anything, really, what is most important is to establish ‘how we can know something?’ What is the best way to arrive at knowledge? What do you think is the best to find something out? What kind of sources can we rely on?

My new acquaintance shifted her eyes with an even more blank look. “I don’t have time for this,” she said, and turned away.

Perhaps one day, she may find the time.

If she is reading this, I would like to let her know that I sincerely welcome an initiative to continue our discussion. Third time’s the charm?

For more of my articles on climate and energy, and my experiences from Bonn, look here. Even better idea, however, is to read the short, evidence-dense book Climate Gamble or browse the graphs in their blog. If you would like to have a discussion in the comments below, please take note of my Commenting policy. In a nutshell:

Cell Biologist, science communicator, an agricultural and biodiversity analyst, and a fiction writer.
View all posts by Thoughtscapism →
This entry was posted in climate, epistemology, nuclear, science communication and tagged COP23, UN, WHO. Bookmark the permalink.

3 Responses to Conversations with an Anti-Nuclear Protester, Take Two