At the Source: Where 13 % of Swiss Electricity is Created

Posted on January 25, 2018 by Thoughtscapism 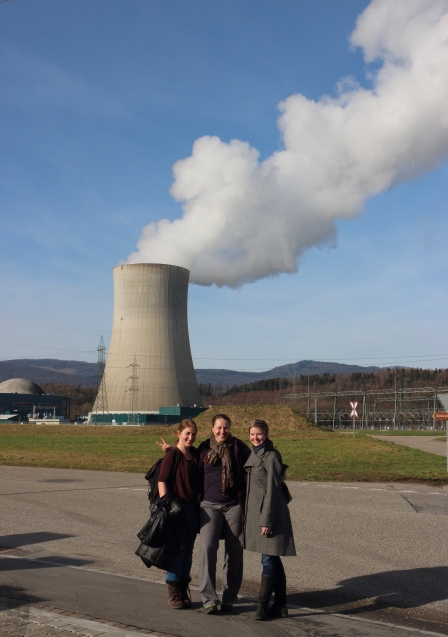 On our way in to the plant with my girlfriends

A friendly nuclear engineer I met at the screening for the movie New Fire made the off-hand mention that he might be able to give a tour of his nuclear plant, Gösgen – an offer I held onto like a leech! Yesterday it happened. It was a bit of a walk to get there from the Däniken train station, but the day was sunny and the place was not hard to find… we just followed the source of the clouds.

It is sort of amazing to realize that the little dome (to the left of the hyperboloid cooling tower) is the source of so much energy, that the mere waste heat from that process continually vaporises water enough to create decent-sized clouds.

Well at the entrance to the plant, we were met by my nuclear contact, and he handed us over to the great care of our tour guide for the day, Heinz, who had grown up playing on the greens around the power plant.

Enter the obligatory jokes, “Look, even the trees are dead here!!” (For posteriority, let it be stated that it’s January)

It turns out that the entrance building of the nuclear plant is actually a museum about electricity generation, with roomfuls of large models, charts, videos, and fancy high-tech gadgets enlightening the visitor about types of energy, the Swiss grid, handling of nuclear reactions and fuel, as well as about things like the cosmic background radiation.

What we learned about the redundancies in the safety systems around the reactor were pretty impressive. Not only the four-fold pressure-triggered passive cooling-water tank systems, and the four layers of casings around the reactor building (able to withstand airplane strikes and bombings), but also the back-up tanks of cooling water in case of water-shortage (calculated for cases of drought or earthquakes shifting the course of rivers), as well as emergency access to groundwater stores… in connection to a complete duplicate of their nuclear operation-room.

Having that kind of backup, according to our guide, would have made the crucial difference at Fukushima, and allowed it to weather the tsunami without an accident (note, luckily the situation at Fukushima lead to very low levels of radioactive leakage and no deaths from radiation – read more here or watch a recent trip report here).

Uranium in its various forms. One of the small black pellets on the left is enough to provide a person with all their energy needs for a year.

There were also no less than six emergency backup diesel generators housed in three separate buildings, to be used only in a case of a general black-out, loss of own electricity generation, as well as a failure of the plant’s exclusive connection to a waterpower plant (again calculating for grid malfunctions or earthquakes shifting the course of rivers).

One of the highlights of the exhibition was seeing a proper Cloud Chamber in action. It was a glass-covered tabletop, containing a layer of supersaturated alcohol vapor – which acts like a live screen for detecting the passage of ionizing radiation, particularly muons, aplha (helium atoms) and beta (electrons or positrons) particles. The alpha radiation looks like thick cloudy puffs, while muons and beta particles show up as thin lines, that sometimes get deflected by collisions. These are particles bombarding us all the time from the cosmic background radiation, so there were lot of trails every second. They also had a radioactive part of an old gas-lamp to generate extra particles with to demonstrate even more alpha radiation, like here below:

Such a detector inside the reactor dome would be pretty quiet, however, because the building’s several casings effectively shield it from background radiation.

We had to leave most of our belongings behind at the entry to the plant proper, with airport-like security controls, and unfortunately camera’s were also out of the question – luckily there are some official photos available at their own site (check out the changing light-show-on-the-plant on the main page). Our tour took us through the operation room (Kommandoraum, the one with lot of windows next to the reactor dome), the turbine room (Maschinenhaus, the large windowless building between the tower and the dome), the cooling tower, around the reactor dome and the back-up power buildings. 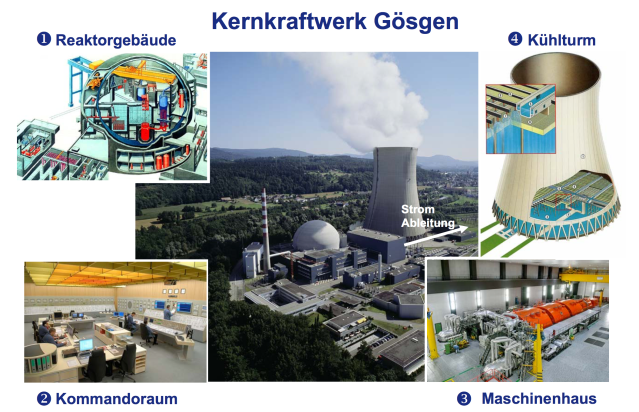 Seeing a cooling tower up close was pretty cool! The constant monsoon condense-rain (23 Celsius, or about 73 F) at the base of the tower (where it’s open, see the little criss-cross structures that are about five+ meters tall) was impressive, as was the tropical atmosphere in the turbine room, whose deafening noise required earplugs.

If you look carefully, you can also see a little horizontal stripe along the shadow side of the cooling tower? I’d love to wrangle a permission somehow to climb those tiny stairs and to the top of the 150 m tower… the natural next step after climbing several hundred meters of mountainside on Via Ferrata routes. 😉 We heard that someone had once actually proposed to their wife on top of that thing! Another story was about one somewhat survival-averse paraglider who was flying over the tower and was in danger of crashing because of the turbulence from rising vapour – which, btw, is simply water straight from the neighboring river Aare being turned into clouds.

Big thanks to the great friendly staff of Gösgen-Däniken, we had a wonderful tour! Swiss people have a lot to be proud of in their nuclear plants, which are built with rigorous safety and back-up mechanisms in mind. Swiss electricity is also very green, right now fourth greenest in Europe, as you can see from the summary statistics of the latest year at Energy for Humanity​’s Climate Leadership Report or at the live stats on Electricitymap.

This is thanks to lot of hydro in the mountains – almost 60% share – with nuclear power to complete the picture with its 33% share of electricity generation. This is unfortunately down from near 40 % from a few years earlier, due to political pressure to phase out nuclear, following Germany’s anti-nuclear wave. You can see the Swiss stats in detail here. I’m really hoping the people and politicians here, like in Sweden and France, will change their minds about a nuclear phase-out after Germany’s warning example of failed decarbonisation efforts.

But, let’s not let all that data get in the way of my TRUE motivation for writing about nuclear energy – which many readers have already guessed* at (*ahum, loudly proclaimed). Heinz did, after all, supply us with a generous helping of #NuclearShillChocolate on our way out.

This was no bland generic milk chocolate either, but good quality Swiss stuff with a subtle croquant touch. Delicious enough to change anyone’s mind 😉

So long, Gösgen, and thanks for all the chocolate! 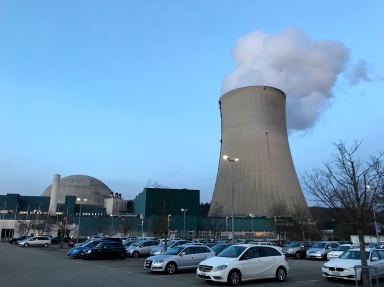 For a more about why I became interested in nuclear power, please have a look at my articles on climate and energy here. Even better idea, however, is to read the short, evidence-dense book Climate Gamble or browse the graphs in their blog. If you would like to have a discussion in the comments below, please take note of my Commenting policy. In a nutshell:

Cell Biologist, science communicator, an agricultural and biodiversity analyst, and a fiction writer.
View all posts by Thoughtscapism →
This entry was posted in energy, nuclear and tagged Switzerland. Bookmark the permalink.

7 Responses to At the Source: Where 13 % of Swiss Electricity is Created