I began my three-part series on energy accidents to answer the question: “What about Chernobyl?” This type of concern invariably comes up whenever nuclear power is discussed, as fear of nuclear accidents is something that is cemented into our cultural consciousness. I wanted to help put these concerns into perspective.

In my first look at that question I put the World’s Deadliest Energy Accidents in Perspective. I dedicated the next piece to environmental concerns: “What About Radioactive Wastelands?” A Look at Chernobyl’s Effects on Nature, assessing the idea (which I also used to hold) that nuclear accidents could make large swaths of land uninhabitable for humans and nature. I noted that nature was notably impacted by the radioactive contamination in about 40 square km (15 square miles) area around the power plant, or about 1-2% of the Chernobyl Exclusion Zone, including dead and stunted trees and rodent and invertebrate deaths. Most of the areas quickly recovered, however.

Read more in:  “What About Radioactive Wastelands?” A Look at Chernobyl’s Effects on Nature

The absence of people in the Zone lead to a increase in wildlife numbers. Undeterred by radiation, thriving populations were established of more than 400 vertebrates, including many protected species. As the WHO put it: “a unique sanctuary for biodiversity” was created.

It appears then, that common idea of an uninhabitable wasteland as consequence of the Chernobyl accident is misleading, and large camera trap surveys have found no evidence to support the idea that animal populations would be suppressed in highly contaminated areas.

Now for the last part of this three-part series: how do these environmental impacts compare to the effects of other energy accidents?

It is not as easy to compare diverse environmental effects as it is to count human deaths, but I have tried to put the extent of some of the largest energy accidents in context with regards to the area and numbers of wildlife impacted.

Skimming oil in the Gulf of Mexico during the Deepwater Horizon spill, May 29, 2010. Credit: NOAA , CC BY

Oil spills, which often take only a handful or no human lives directly, are among the most devastating when it comes to detrimental effects on ecosystems. There have sadly been many grave accidents of this kind. DeepWater Horizon, ExxonValdez Alaska, and Ixtoc oil spills top the list (although good information on environmental impacts is hard to find concerning several large oil spills).

Massive hydro dam failures, like the Banqiao disaster, also have sudden and devastating effects on the surrounding terrestrial wildlife, drowning animals and destroying their habitats, which can result in long-term consequences on local ecosystems. There’s less risk of lasting contamination effects however (excluding the possibility for further damage with regard to industrial facilities in the areas flooded).

Here are 12 accidents that negatively impacted large swaths of land or sea, killing or damaging wildlife in great numbers, in decreasing order of area size. (There may still be other accidents I’ve failed to take into account, or ones we don’t have enough information for.)

As it was with human fatality statistics, it turns out that some accidents have such widespread impacts on land or sea that they leave most other accidents in their shadow. 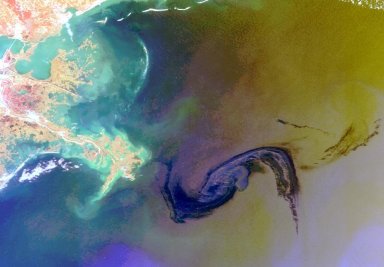 Deepwater Horizon is in a class of its own here. It is estimated to have killed one million coastal birds and caused widespread harm to fish, corals, dolphins, and shellfish, with implications for human health for the cleanup workers and coastal communities as well.

Compared to the top four accidents by area – the three oil spills plus the Banqiao flood – the scope of the rest disappears from view. Judged by area, with 40 square km of impacted forest, Chernobyl is 9th on my list, but on this scale it’s hardly indistinguishable from Sanchi tanker collision, with its 143 square km of oil-slick.

ExxonValdez accident, although smaller in amount of oil spilled, impacted a sensitive coastline in Alaska, killing from 100,000 to as many as 250,000 seabirds, at least 2,800 sea otters, approximately 12 river otters, 300 harbor seals, 247 bald eagles, and 22 orcas; and destroying billions of salmon and herring eggs. Its restoration, as observed by NOAA (see the infographic below), has taken decades. 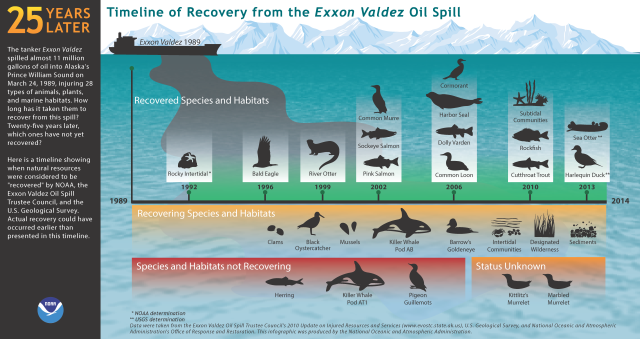 Below the top three

Next, lets remove three of the largest disasters – Deepwater Horizon, ExxonValdez, and Banqiao – from the picture to have a closer look at the rest.

The remaining largest oil spill, Ixtoc in the Gulf of Mexico 1979, contaminated one of the few nesting sites for Kemp’s Ridley sea turtles, threatening the already endangered species. It wiped out crab populations along hundreds of kms of coastline, harmed corals, and drastically reduced fish and octopus catches.

The Amoco Cadiz, a tanker running aground in the French coast of Brittany in 1978, also:

killed millions of invertebrates, such as mollusks and crustaceans, and an estimated 20,000 birds, and contaminated oyster beds in the region.

The horrible thing about oil spills, furthermore, is their frequency: more than 65 oil spills are referenced on Wikipedia’s incomplete list since 2010 alone, each typically spilling at least tens or hundreds of tonnes of oil, all in all resulting in 180,000 tonnes – excluding Deepwater Horizon, in 2010, with its circa 500,000 tonnes. The 1970s Ixtoc and Amoco resulted in about 400,000 and 200,000 tonnes spills, respectively.

Some of the largest oil spills out at sea were never much investigated for environmental effects, like the one with an oil tanker Atlantic Empress off the coast of Venezuela in 1979, which spilled almost 8 times as much oil as ExxonValdez Alaska, while other huge spills (like Castillo de Bellver in the southern Atlantic Ocean in 1983) have been assumed sufficiently swiftly dispersed by currents not to have caused too much environmental damage. Oil fires and spills in Kuwait and the Persian Gulf have also caused environmental effects on large areas, but since they have largely been results of war, I’ve left them outside of my overview here.

I’ll also mention the rare case of a large-scale wind power accident included above in the graph, which happened at Derrybrien wind farm in 2003 . The construction of a wind farm dislodged 450,000 cubic meters of peat into the nearby river and a lake 20 km away, killing 50,000 fish and disrupting a town’s water supply.

The EU ruled lacking environmental assessments to be at fault.

The area impacted is only one measure of environmental effects. The degree of effects on biodiversity (animal deaths, changes to populations) is another important aspect, and while one-time effects can be devastating, lasting effects are a difficulty in a class of their own. The 4-5 square km of Red Forest in the Chernobyl Zone could suffer long-term environmental effects from radioactive contamination, even if the effects so far may not direly impact the health of the animal populations in the area. But the Chernobyl accident is hardly alone in having long-lasting environmental impacts – as mentioned above, the studies following large oil spills have documented their recoveries to be decades long projects.

But there are also accidents that themselves continue for decades, or even decennia. A rather astonishing example is the 2004 Taylor oil spill in the Gulf of Mexico, which was first hushed by the oil company for six years. While it is relatively smaller in the area it impacts (21 square km), it is an ongoing spill estimated to continue spilling oil for 100 years, and may eventually surpass Deepwater Horizon judged by oil volume. 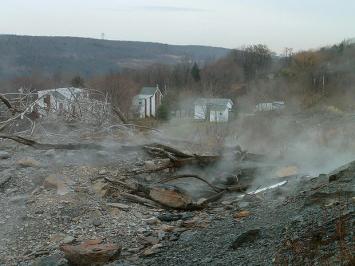 Centralia, PA. Sinkholes and emissions of toxic gases have made the town uninhabitable.

In a similar vein, one of the non-oil accidents in the graph above is the 15 square km large Centralia mine fire, which started in 1962, and resulted in poisonous gas leaks and appearances of smouldering sinkholes, until the town with more than a thousand inhabitants had to be abandoned.

The fires in the underground coal mines are still going strong and, incredibly, are estimated to continue to burn for over 250 years.

The greatest long-term toll on the environment?

Despite the tragic effects of energy accidents, it is important to realize that the greatest environmental destruction is caused not by accident, but through human practices that are ‘business-as-usual’.

Clearing of forests, drilling for oil, excavation of land for open pit mines of tar sand or brown coal, creation of tailing-ponds, creating coal-ash dump sites; merely taking up land that could have been natural habitats; as well as air pollution and greenhouse gases from burning fuels are threatening vastly larger parts of our ecosystems than the spot-wise effects of even the largest environmental disasters from accidents in energy production.

These impacts, for the most part, are not for the short-term, and some can affect global ecosystems for centuries to come. As the recent IPCC biodiversity report underlines:

…based on a thorough analysis of the available evidence, the five direct drivers of change in nature with the largest relative global impacts so far. These culprits are, in descending order: (1) changes in land and sea use; (2) direct exploitation of organisms; (3) climate change; (4) pollution and (5) invasive alien species.

Decimating old towns and ancients forests in order to extend open pit mines already spanning as far as the eye can see, in order to burn more oil or brown coal, spewing carbon dioxide and particulate pollution into the atmosphere – like is happening in Germany and the Hambach mine – is ethically unacceptable in a day and age when we have the knowledge and know-how to produce energy in ways that can reduce mining and emissions to a tiny fraction of that.

Even among low-carbon alternatives, we cannot turn a blind eye to the problems with increase in demand of land and materials like copper and rare-earth elements (REEs) required for electronics, batteries, windmills, and solar panels, resulting in environmental contamination and a greater land footprint. The world’s largest rare-earth mine Bayan Obo, near Baotou in China, is another one of the worst non-accidental toxic wastelands in the world, created in answer to the needs of the world’s tech and energy industries. Although the effects of REE mining are still under-studied, existing studies highlight health and ecological concerns. The Bayan Obo area is moderately to extremely polluted with regards to 27 different metals, in both mine processing and residential areas, and journalists describe the area as a dystopian wasteland, ‘the worst place on earth.’

With this three-piece series of blog posts I hoped to bring some perspective into the grave reality that is energy accidents. I make the case that Chernobyl, despite its famed place in popular culture, ranks nowhere near the worst among energy accidents, no matter if you look at human health or environmental aspects.

I applaud any serious attempts to make more comprehensive comparisons, like the one by the EU project ExternE, visualised in the book Climate gamble (more about the ExternE results in this excellent collection of research by J.M.Korhonen) as follows: 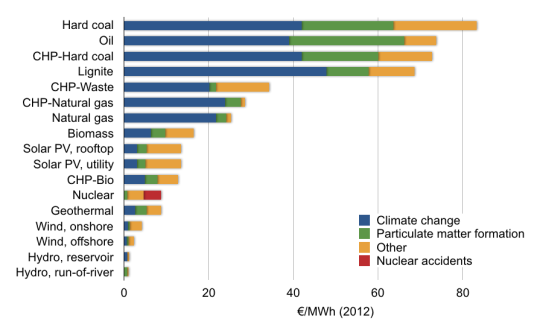 All environmental destruction should matter, and we should strive to minimise it over the board. The impacts of land use, resource use, and emissions need all to be taken into consideration – decrease in one area does not get us far if it drastically increases problems with the other two. We need serious, science-based energy policy in order to better conserve nature.

Borrowing the words of the award winning author and energy analyst, and my fellow Finnish Ecomodernist, Rauli Partanen from ThinkAtom, during his recent presentation on hybrid energy systems. He argues that energy must fill at least three criteria to be clean: 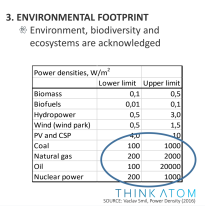 Nuclear power is largely the only energy form that actually ticks all these three boxes.

When questions like “What about Chernobyl?” distract us from these important environmental considerations, we only end up further away from sustainable energy goals, and risk causing more harm to nature and humans alike.

More of my articles on: climate and energy. If you would like to have a discussion in the comments below, please take note of my Commenting policy. Note: if you make long-winded comments with strong claims, especially without clear and well sourced arguments, they may get buried in the back-log of comments waiting for approval, because my time to go through them is limited. Commenting policy in a nutshell: