Posted on June 9, 2015 by Thoughtscapism

As a preteen I wished that all humans would disappear from the planet and the beauty of nature would be left to flourish unhindered. I imagined I would be offered a big red button and I could annihilate the human race with a push (a spectacular technological feat at that, as it would not have any other effect on our planet). I knew which would have been the Right choice. The clear separation of ‘natural’ and ‘artificial’ or ‘man-made’ and their difference in value were obvious to me. 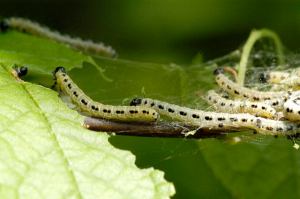 Around that time, my favourite place on earth was my grandparent’s cottage in the Finnish countryside, or more specifically, the biggest bird cherry tree I have ever known that grew in my grandmother’s forest. With five sizeable trunks the amicable tree covered a house-sized portion of the slope, and served as a climbing course, swinging rope station, and favourite hangout for all the grand-children. Until one devastating spring, when I arrived to find the tree under full-scale attack by bird-cherry ermine caterpillars. For anyone unfamiliar with these moths  – as I was – this is how Wikipedia describes what they can do:

Because the caterpillars make an extensive weblike nest, they can eat a whole tree bare unhindered

But these simple words “extensive weblike nest” miserably fail to convey the real life impression of this nightmarish scene. By now, I’ve seen whole glades of bird cherries that stand out against the greens of the forests, cocooned in their ghostly caterpillar housing. I have even read about a whole graveyard resembling a scene from a horror movie thanks to the bird-cherry ermine. That’s what this beloved place had become – a graveyard for a part of my childhood. 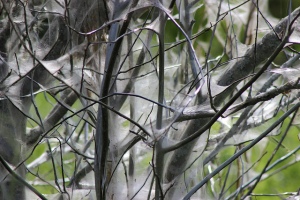 I entered a state of martial law. Something had to be done. I was about to try and draw hundreds of meters of garden hose through the forest to spray the tree clean of the pesky little creepers before my grandpa stopped me with that look that physicians have when they break news to terminal patients. I dragged one little bucket of water to the tree before I realised the futility of the splash it made on the base of one of the trunks.

In no exaggerated words, there was a burial march singing in my soul as I saw the leafless canopy draped in a web of death, and the white and yellow creepers wriggling along on the silk-covered trunks, teeming in voluminous hanging pouches of concentrated caterpillar flesh. Our tree never recovered from that attack. In a few years time all of its five formidable trunks, each named and well loved (Hen, Rooster, and Chick branches in particular) lay on the ground rotting.

This phenomenon among others helped me understand that I had perhaps put the wonders of nature on a somewhat too narrow a pedestal. Nature wasn’t solely a thing of utopian beauty. Attaching a holy-like aura to its (humanless) manifestations was perhaps a tad simplified way at looking at things. At times nature could also be a silver-webbed harbinger of armageddon.

It took me a while to continue developing a complicated appreciation of humanity as well as of nature, and to realise that ‘nature’ in fact made little distinctions between humans, pathogens, rainbows, machines, rocks, primal slime, snakes, rhinos, or soil – we were all just different contributors to the myriad manifestations of matter in the natural world.

Certainly I acknowledge that there is something special in the way that some of that matter has picked up the quirk of self-replication, and something worrisome in that, in our time, the intricate relationships within the networks of self-replicating organisms are becoming unbalanced. Our very successful group of human organisms is getting so numerous and impactful that it is causing problems for many of the other self-replicators. “We cause problems to other organisms” – this expression includes such a subtle human aspect of thinking that I had never even thought of questioning it. Ecosystems are in trouble. Right?

my biology teacher once told me in elementary school, and it gave me pause. Let me elaborate: it is not a problem for the plant to be eaten, ripped up by the roots, or even to disappear as a species, any more than it is a problem for it not to have any disturbances at all. The plant simply responds in different ways to different circumstances. It is still here thanks to some serendipitous changes that have allowed it to react to many circumstances in a way that still allows it and its seeds to grow and multiply. *Not* managing that feat was not problematic for those plants that didn’t, and in result died out. Not a problem. 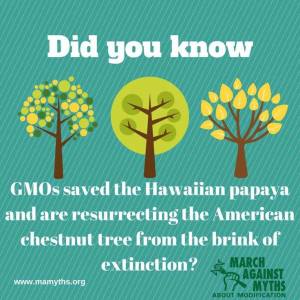 I’m happy that we now have the means to help these plants survive. Meme: March Against Myths About Modification

Having a problem in the first place is a human concept. We assign a purpose to the plant – assert that it wants to grow and proliferate. We value the plant for its own sake, because, well, we like things to be green and flourishing. We will view something that comes in the way of that purpose as being problematic. Plants themselves assign no such attributes.

This is a part of the beauty in us humans. A plant would not ‘object’ to its own destruction, not even wiping all of its kind from the face of the earth. I would. That is sentimental of me. I like to hang on to that sentiment, because I value our human characteristic of valuing nature.

Ecosystems, strictly speaking, are not in trouble. They just are in one state or another. If something happens that disturbs the conditions that help sustain them, they may collapse. Species and biological eras come and go. Nobody protests. Most organisms don’t have a problem with that. But now that we are here, when an ecosystem may collapse, *we* have a problem with that. For myriad reasons, we care.

So I did find something valuable about humans after all. I overcame my radical environmentalist nihilism. At the same time, I have by no means stopped appreciating nature. I feel a dread when I fly over Europe and realise how little wilderness there is left. I still think a forest is the best place for a person to be. I’d also like my children to grow up knowing that there are still tigers and rhinos and polar bears in their natural habitats somewhere on this earth. As fascinating an aspect as humans are of nature, I’m hoping we won’t eat up all the other flora and fauna on our way.

This is why it is important to me to make thoughtful choices in the way I live. This also includes the efforts I put into communicating what I’ve learned about the environmental aspects in areas such as farming and energy production. Pretty early along the way, my love of nature got married to my wish to understand, and a passion for science was the fruit of that union. Why science? Put bluntly, science is the effort of sincerely wanting to find something out, combined with the humility of insight about our cognitive failings – like bias, jumping to conclusions, and cherry-picking (Am I biased? Are you?) – that is to say, the ease with which we can fool ourselves.

Science weeds out what we actually can know about the world, and helps us appreciate how amazing the stuff is that we necessarily didn’t even know was going on in nature. 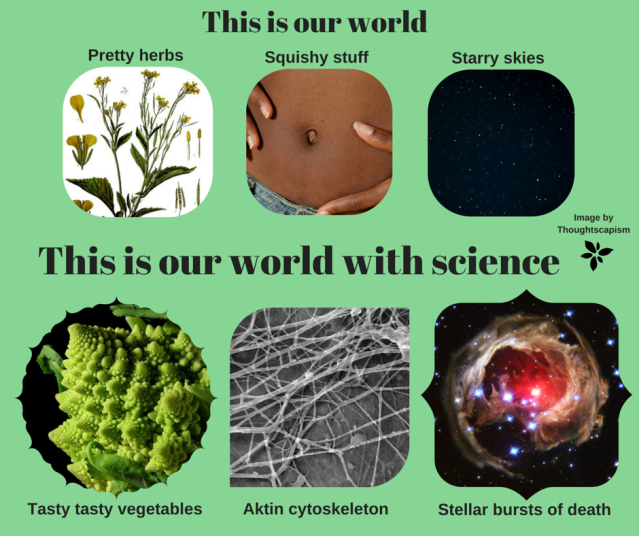 Many humans care deeply for the environment, and I really appreciate that sentiment. In order for us to have the impact on the world that we would like to have, we also need knowledge. To focus the discussion on actual issues, not idealised ones, it is important to put our feelings through some thoughtful reflection. Feelings have been pretty useful to us in the course of our evolution. They have helped us be wary of anything new and different, to take the conservative choice just to be sure. Then there’s the feeling that’s helped define our species in so many ways – curiosity.

Science puts both of these in good use: it applies open curiosity to how the world works in order to overcome our preconceived notions, and is wary of anything new until it has been tested, re-tested, and tested again to eliminate bias and make sure we really aren’t fooling ourselves about it. Want to help maintain biodiversity? Save the whales? Feed the hungry? The starting point is evidence. A good starting point is: ‘this study says one thing, another says another thing – how could we best understand the evidence?’ It is vital to put in perspective what weight different kinds of evidence carry (for more on evidence see the hierarchy of evidence or what I’ve written about it here). 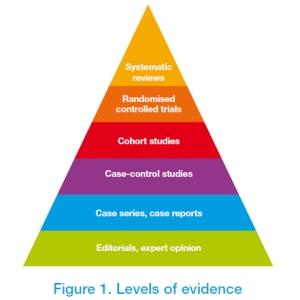 Image from MStrust. For more read The Vox The one chart you need to understand any health study.

We should look at the big picture, evaluate the evidence in context of the body of scientific literature, at the scope of all the the reviews and meta-analyses.

We should make it clear to ourselves what part of our thinking is about our values, and what part is evidence. Sometimes people may be afraid that evidence would somehow negate their values. I wish they weren’t. Our values are more robust than that. Faced with the undeniable evidence of thousands of crawling bird-cherry ermine caterpillars destroying my tree, I did not stop valuing nature. I just gained a more nuanced understanding of *its nature*.

Science has made me change my mind on a number of occasions, and my values have only become better defined, not dictated by vague fears or attached to simple labels.

I used to buy organic because I wanted to support environmentally friendly farming. Later on I found out that, while it may be a Natural Assumption to make, unfortunately the idea organic as the champion of the environment falls flat under scrutiny. My heart is still heavily set on fighting for the wellbeing on nature and animals. Hopefully, now, I can do so with more fruitful results.

I always understood genetic engineering was simply a tool, neither good nor bad in itself, but knew it might have some unintended harmful effects. The scientific literature has taught me that it actually comes with several environmental benefits. Let’s get on with those benefits where we can use them to help the land and its animals.

I used to think nuclear power was dreadful, but have learned it’s much safer than most people think, and together with wind and solar, it’s a vital part of the solution for cutting carbon emissions. Bring on the new and better technologies to do what we realistically can to slow down global warming. I don’t want grand ideas and ethically superior assertions. I want pragmatic suggestions with evidence of feasibility that can really make a difference.

My bird cherry may be dead, but my new favourite place in the world is a state of mind that is open to understanding and compassionate about the world around us, that knows how to apply critical thinking to the important issues we need to deal with. If we don’t value evidence, that may come to undermine all that we do value. For the sake of nature, let’s science it up.

4 Responses to Plants Don’t Have Problems