Chemical Exposures: The Good, the Bad, and the Tiny

I have often written about the lack of perspective on chemical scares, which is why I was happy to find out that Swedish Professor Emeritus in toxicology, Lennart Dencker, has written a book on this topic called “Not as dangerous as many might think.” 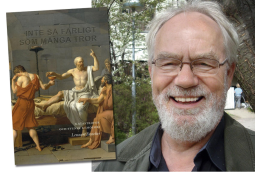 Prof Denck interviewed at the Swedish magazine Research and Progress about his book.

In the Uppsala University press release he elaborates that with his book he wants to give the public, particularly teachers, better tools to assess the many alarm-inducing headlines we see about chemicals. He feels a responsibility to share the knowledge he has accumulated during his research career, and wants to help give the younger generation a better chance at developing a reasonable view of the situation pertaining to risk and toxicology.

Our environment has never been as ‘clean’ as it is today in Sweden,

he says in an interview to the Swedish magazine Research and Progress, pointing out how significant toxic exposures like indoor smoking, leaded gasoline, and older generation pesticides have all but disappeared within his own life-time.

Professor Dencker, together with his colleague Magnus Ingelman-Sundberg, a professor in molecular toxicology at the Karolinska Institutet, recently wrote an article in Svenska Dagbladet (one of Sweden’s largest newspapers) titled “Unjustified fear of chemicals.” In that piece the toxicology experts make it clear that the public needs more perspective on the scales of chemical exposures.

Biology is a balancing act of millions of molecules

For any molecule to be able to exert a biological or toxicological effect on us, it must bind to a recipient molecule (e.g., receptor or transporter) which either transmits the signals downstream, or changes in its function result in other molecular consequences. This effect of the chemical is entirely dependent on the dose, and is practically absent when the doses are small enough. An exposure can be measurable without having any measurable effects on us.

The two toxicology professors point out that many of the sensible cautions on effects from different categories of substances (like carcinogens or endocrine disruptors) come from situations where our exposures to the chemicals are relatively large. Such is the case with many medicines, where the dose required for therapeutic effect often overlaps with the doses where unwanted side-effects are common.

Many of these worries over harmful effects are then transported from cases of large doses and applied indiscriminately to vanishingly small amounts, as if these substances could still exert hundreds of thousands times larger effects than their dose implies. But there is no magic shortcut, no easy way to amplify the effect of one particular molecule, that could allow it to achieve the same kind of feats which usually require veritable armies of said molecules.

The information in the table originates from the Swedish book Not as dangerous as many might think, or Inte så farligt som många tror, by toxicology professor Lennart Dencker, published at Nya Doxa. Also featured in a newspaper article in Svenska Dagbladet.

Let’s take endocrine disruptors as an example. The drug diethylstilbestrol (DES) was in use against miscarriage and menopausal symptoms in 1940-1970. Later it was discovered that the treatment increased rates of various adverse effects, including cancer, and its use was drastically limited. This perfectly warranted concern of adverse effects at large doses, however, is now commonly applied nearly everywhere where the word ‘endocrine disruptor’ appears. The plastic compound, bisphenol A (BPA) found in many packaging materials, has much weaker affinity for the estrogen receptors than DES (whose affinity is on par with human hormone estradiol) and furthermore, we are exposed to BPA at levels 25 000 times lower than the therapeutic dosage of DES. Yet BPA is treated with an aura of equally ominous chemical threat.

There’s a certain irony to drinking a soy latte from a BPA-free mug, but that’s not something the chemophobic fear squad seems to understand.

With these naturally occurring endocrine disruptors, we often intuitively apply the appropriate principles of moderation – we understand that eating something in excess may not be a good idea, yet we don’t doubt that smaller amounts of the foodstuff in our diet is hardly a cause for concern.

Deaths from large doses, anxiety from vanishingly small ones

The Swedish toxicology professors Dencker and Ingelman-Sundberg point out that while there are thousands of deaths caused by pharmaceutical drugs in Sweden every year, the number of deaths due to environmental chemicals is negligible. The chemical exposures from our environment, particularly from food and general consumer items, are simply at such low levels that they very rarely cause ill effects.

This, however, is not reflected in the public’s understanding. A recent study, Lay-people’s knowledge about toxicology and its principles in eight European countries surveyed 4934 people and found misconceptions and worry about small amounts of chemicals to be very prevalent. On average, people even tended to agree with the nonsensical statement: “I would like to live in a world where chemical substances don’t exist.” (The average was close to 4 on a scale of 1 to 6, where 1=don’t agree at all to 6=strongly agree.)

This illuminates a fundamental issue in communication: by scientific definition almost everything is chemicals, whereas in every-day understanding ‘chemicals’ refers to a somewhat vaguely imagined group of inherently harmful artificial substances. This perceived harmfulness takes on the characteristics of ‘contagiousness’ that defies attempts to apply any sense of proportion. As the Finnish saying goes, “a drop does not kill you and you don’t drown in a bucket.” But some drops do most apparently haunt us, no matter how small. 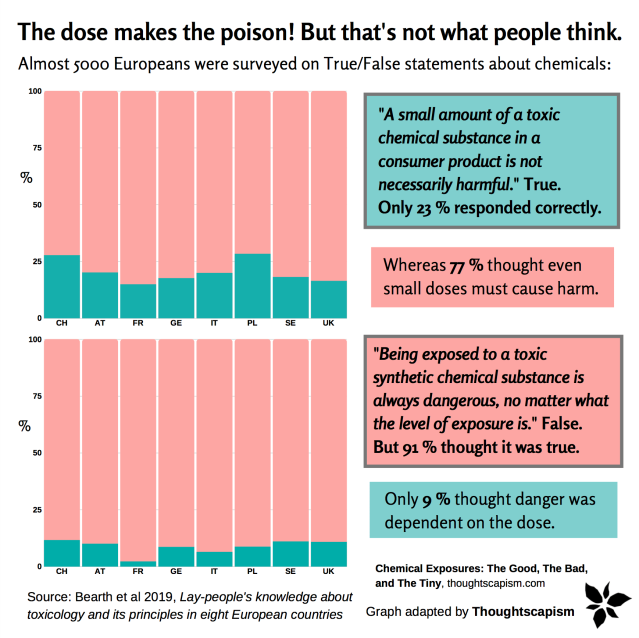 Bearth et al 2019, Lay-people’s knowledge about toxicology and its principles in eight European countries surveyed 4934 people in total, or more than 600 each in Switzerland (CH), Austria (AT), France (FR), Germany (GE), Italy (IT), Poland (PL), Sweden (SE) and the United Kingdom (UK).

Considering these prominent gaps in language and understanding, it is easy to see where professor Dencker is coming from when he criticizes the propensity to make toxicity information available to the public without also giving them the proper tools to assess that information. (I’m looking at you, California, with your insane warning labels, and you, IARC, which your confusogenic cancer categorisations.) As Dencker tells Research and Progress:

I do not think it is reasonable for the public to bear the psychological responsibility of assessing whether a toxicity warning is credible or reasonable.

He calls for more responsible investigative journalism, as well as careful regard for researchers when they give out statements. He finds that the chemical regulations of Sweden and the EU (ECHA) are often based on excessively cautious assumptions, and is worried that this may lead to unnecessary administrative burdens and in fact result in ill effects on mental health – cases where anxiety over trace amounts of substances is more harmful than the trace amounts themselves.

I greatly appreciate these toxicology professors wanting to share their insights with the public, and I considered their reflections well worth translating and sharing onwards. Big thanks to them, and to Dr Angela Bearth for her work on consumer behaviour and chemophobia. I can’t wait to read what her research will uncover next about the best tactics to help bridge that communication gap.

I share much of these professors motivations in making topics of chemical health risks more accessible to the public. My previous articles and infographics on these topics include pieces on risk assessments (the article series Risk In Perspective); on the concepts of chronic and acute toxicity (Measures of Toxicity); as well as on regulatory safe limits and their relation to our exposures to pesticide residues (Toward More Intuitive Toxicity Information). On perspectives to specific toxicity risks, such as those associated with food and medicine, you can read more under Farming and GMOs and Vaccines and Health.

If you would like to have a discussion in the comments below, please be aware that I may not always have a lot of time to review and accept my accumulating backlog of comments. Also, take note of my Commenting policy. In a nutshell:

4 Responses to Chemical Exposures: The Good, the Bad, and the Tiny