Off the Press: Nuclear Energy Is a Fast and Inexpensive Way to Improve the World

Posted on December 11, 2017 by Thoughtscapism

This piece was originally published in the Finnish newspaper Aamulehti on Friday 8th of November 2017. The article is based on an earlier English blog piece I wrote, which was quite a bit longer than the 4500 character limit at the paper, and unlike it, included plenty of graphs and hyperlinked sources. For a long version of the topic you can head on over there. However, I felt I could hardly turn down a reader’s kind request to translate the newspaper-published piece as well. So here it is: the TL;DR version of my economical arguments around low-carbon electricity. A few graphs added.

We should produce more carbon-free energy in order to stop global warming, and avoid losing millions of lives to air pollution every year. But how? Despite the boom in renewable energy, carbon emissions in the world are on the rise. Concerning Finland’s largest source of carbon-free energy, the headlines in the media make for chilling reading: more delays and rising costs in the construction of nuclear power. Which is why I was astonished when I began digging up more exact numbers on the topic.

Despite delays, the construction costs of Olkiluoto 3 nuclear plant are comparatively small: when the plant comes into operation, its lifetime electricity generation is so tremendous, that the price of construction is at about a cent per kilowatt hour. The building costs of the next planned Hanhikivi plant is estimated to be similar per unit of energy. In Europe, construction costs of renewables, though drastically lowered, are still around four times as large at their cheapest. The price of building nuclear power, in other words, is only a threshold issue – not a long term argument against nuclear energy, but strongly in its favour.

For sources and calculations, see the original blog piece.

But nuclear energy has many other costs that should be taken into account: the lifecycle of nuclear fuel, plant upkeep and maintenance, and so forth. These type of comprehensive calculations put the price of nuclear power and renewables much closer to each other. In Finland and the US, nuclear is estimated to be the cheapest carbon-free alternative after onshore wind, whereas in France, UK, and South-Korea, it’s the the cheapest one all in all (a look at LCOE comparisons here). In the light of these figures, I can’t help but wonder about nuclear’s reputation as a particularly expensive energy form.

Mere price or even amount of electricity, on the other hand, does not translate directly to value for the consumer if availability is compromised. It is critical for hospitals, schools, public transport, private households and many other electricity consumers that electricity is available at any (or all the) time. Renewables like wind and solar are a good addition to clean energy generation up to the point when their intermittency becomes problematic. Electricity storage is still so tricky and expensive, that entire national battery capacities are counted in minutes. In this sense nuclear power is of a high value because it produces large amounts of energy at a reliable rate. 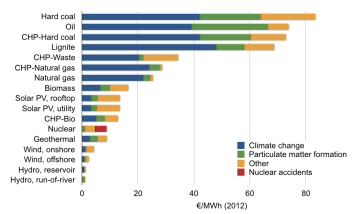 More about the many safety aspects of nuclear power, including a discussion about the ExternE project here.

Perhaps the most important measures are, after all, the total impacts that different energy forms have on the wellbeing of humans and nature – estimates of all external costs from mining, emissions, accidents, and other burdens over their entire life cycle. This nuanced question has been analysed among others by the EU-funded project ExternE, whose results resemble other similar comparisons: nuclear power is among the least harmful energy forms. Hydro, wind, geothermal, and nuclear energy save human lives and pose the smallest burdens on nature.

People often fear nuclear power out of proportion – to such a degree, that at Fukushima, fear was a greater danger than radiation, which remained around the same levels as natural background radiation in Finland and caused no casualties at all.

Many still say that the risk of human error in the context of nuclear power is too great. I agree. Human errors in the assessment of the risks of nuclear power cost millions of lives every year – every time an opportunity to replace coal power with cleaner energy is wasted. Mitigation of climate change would be in much better shape if other countries would have followed France and Sweden’s lead back in the 70s and 80s.

The good news is that nuclear power is the fastest proven method of decarbonisation. Thirty years ago, France and Sweden reduced their emissions 3-4 times faster than what the best renewable booms have managed in the last decade.

The much delayed Olkiluoto 3 plant alone will be a 50 % larger addition of clean energy into the grid than what the record-holder on wind power, Denmark, has achieved at its fastest.

There are many ways to a better world, and all are needed. Nuclear energy is one of the highways.

For a more thorough look of the topic and the sources, please read Nuclear Power is the Fastest and Lowest-Cost Clean Energy Solution. For more of my articles on climate and energy, look here. Even better idea, however, is to read the short, evidence-dense book Climate Gamble or browse the graphs in their blog. If you would like to have a discussion in the comments below, please take note of my Commenting policy. In a nutshell:

Cell Biologist, science communicator, an agricultural and biodiversity analyst, and a fiction writer.
View all posts by Thoughtscapism →
This entry was posted in climate, energy, finance, nuclear, renewables and tagged Finnish, Sweden. Bookmark the permalink.

6 Responses to Off the Press: Nuclear Energy Is a Fast and Inexpensive Way to Improve the World